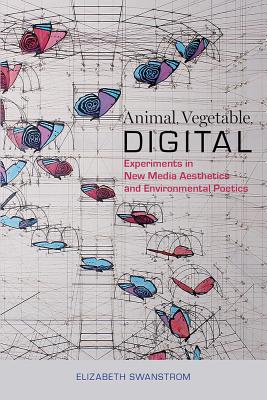 Winner of the Elizabeth Agee Prize in American Literature

An audacious, interdisciplinary study that combines the burgeoning fields of digital aesthetics and eco-criticism

In Animal, Vegetable, Digital, Elizabeth Swanstrom makes a confident and spirited argument for the use of digital art in support of ameliorating human engagement with the environment and suggests a four-part framework for analyzing and discussing such applications.

Through close readings of a panoply of texts, artworks, and cultural artifacts, Swanstrom demonstrates that the division popular culture has for decades observed between nature and technology is artificial. Not only is digital technology not necessarily a brick in the road to a dystopian future of environmental disaster, but digital art forms can be a revivifying bridge that returns people to a more immediate relationship to nature as well as their own embodied selves.

To analyze and understand the intersection of digital art and nature, Animal, Vegetable, Digital explores four aesthetic techniques: coding, collapsing, corresponding, and conserving. “Coding” denotes the way artists use operational computer code to blur distinctions between the reader and text, and, hence, the world. Inviting a fluid conception of the boundary between human and technology, “collapsing” voids simplistic assumptions about the human body’s innate perimeter. The process of translation between natural and human-readable signs that enables communication is described as “corresponding.” “Conserving” is the application of digital art by artists to democratize large- and small-scale preservation efforts.

A fascinating synthesis of literary criticism, communications and journalism, science and technology, and rhetoric that draws on such disparate phenomena as simulated environments, video games, and popular culture, Animal, Vegetable, Digital posits that partnerships between digital aesthetics and environmental criticism are possible that reconnect humankind to nature and reaffirm its kinship with other living and nonliving things.

“In her book, Animal, Vegetable, Digital: Experiments in New Media Aesthetics and Environmental Poetics, Elizabeth Swanstrom takes an object-oriented view of new media aesthetics and the environment. Swanstrom breeches boundaries and collapses binaries, seeing code as performance instead of infrastructure and analogous to the “mechanizations of nature,” including an analysis of the revelations of William Gibson‘s Agrippa (1992).”
—Well-Red Bear

“Swanstrom gives us nature and technology, not nature versus technology, and as such her book is an original and important contribution to contemporary discussions of digital media and sustainability. Animal, Vegetable, Digital is a polished piece of creative exploration aimed at nudging readers toward new ways of seeing things.”
—Lisa Gitelman, author of Paper Knowledge: Toward a Media History of Documents and Always Already New: Media, History, and the Data of Culture

Elizabeth Swanstrom is assistant professor of English at Florida Atlantic University. Previously, she was a postdoctoral research fellow at Umeå University’s HUMlab in northern Sweden and the Florence Levy Kay Fellow in the Digital Humanities in the English Department at Brandeis University.