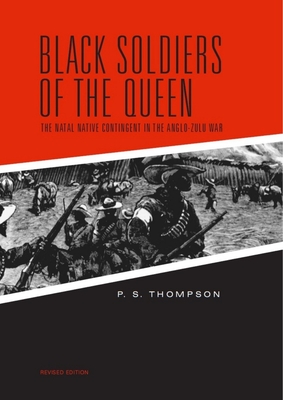 Black Soldiers of the Queen (Paperback)

The Natal Native Contingent in the Anglo-Zulu War

Africans who fought alongside the British against the Zulu king.

P. S. Thompson is retired Associate Professor of History at the University of  KwaZulu-Natal, South Africa, and the author, with John P. C. Laband, of The Illustrated Guide to the Anglo-Zulu War.

Praise For Black Soldiers of the Queen: The Natal Native Contingent in the Anglo-Zulu War…

“Black Africans made up more than half of the British army that invaded Zululand in January of 1879 and went on to fight the storied battles of Isandlwana, Rorke’s Drift, and Ulundi. The British force totaled some 16,800 men, at least 9,000 of whom were Africans. Of these a few, perhaps as many as 1,000, were dissident Zulus. . . . The bulk of the large African component, however, was comprised of the Natal Native Contingent (NNC), men recruited from Africans resident in Natal.
“This is the force whose story Thompson told in a 1997 edition [and he] has produced a revised and expanded version that is sure to remain the definitive account of Britain’s black allies in the Anglo-Zulu War.
“The literature on the Anglo-Zulu War contains very little about the NNC, for reasons that are partly political, partly cultural. During the imperial era, Europeans were not interested in diminishing their own exploits by extolling those of their native [allies]. And in the wake of empire, the African had no desire to glorify them. To many in the current generation, the NNC [were] egregiously incorrect politically and best forgotten [but] this would scant the part played in the Anglo-Zulu War by the province of Natal. In 1879, Africans made up the vast majority of the population of that province, many of whom were peoples who had been driven from Zululand as a result of Zulu expansion and therefore bitterly anti-Zulu.
“In addition to providing an account from the contingent’s perspective of NNC participation in the epic battle of Isandlwana, Thompson has recounted their service over the whole scope of the war. . . . His account is based on a rich selection of contemporary primary sources: diaries, journals, letters, memoirs, government documents. This extensive research has enabled the author to conclude that the NNC was indispensable to the British victory in the Zulu War.” —Journal of Military History
or
Not Currently Available for Direct Purchase
Copyright © 2020 American Booksellers Association