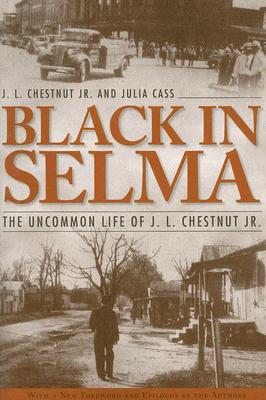 Black in Selma is the expansive autobiography of J. L. Chestnut Jr., a key figure of the civil rights movement in Selma, Alabama.

Born in Selma in 1930, Chestnut left home to study law at Howard University in Washington, DC. Returning to Selma, Chestnut was the town’s first and only African American attorney in the late 1950s. As the turbulent struggle for civil rights spread across the South, Chestnut became an active and assiduous promoter of social and legal equality in his hometown. A key player on the local and state fronts, Chestnut accrued deep insights into the racial tensions in his community and deftly opened paths toward a more equitable future.

Though intimately involved in many events that took place in Selma, Chestnut was nevertheless often identified in history books as simply “a local attorney.” Black in Selma reveals his powerful yet little-known story.

In the 2014 film Selma, director Ava DuVernay takes audiences to the climactic confrontation between civil rights advocates and the state’s security forces of March 1965. Readers looking for a deeper understanding of the events that preceded that epic moment, as well as how racial integration unfolded in Selma in the decades that followed, will find Chestnut’s story and memories both a vital primary source and an inspiration.

Praise For Black in Selma: The Uncommon Life of J. L. Chestnut Jr.…

“The autobiography of J. L. Chestnut is the story of Selma’s first black lawyer and prodigal son, but it is also part of the history of the race, sweeping biblically from enslavement by segregation to freedom to the ambitious aftermath of redemption.”
—New York Times Book Review

“Unfolds with the richness that one expects in a novel. . . .Less about the famous civil rights figureheads like Adam Clayton Powell, Martin Luther King Jr., and Stokely Carmichael (though the author has his say about all of them) than the grass-roots folks who lived in Selma before the era of freedom riders, and remained there, toiling for social change, after the national leaders and media left. [This book] brims over with the social texture and political life of a Southern town raised to the level of a national symbol.”
—Los Angeles Times

J. L. Chestnut Jr. is a civil rights attorney, columnist, and radio talk show host in Selma. He founded Chestnut, Sanders and Sanders, the largest black law firm in Alabama. Julia Cass is a freelance writer and journalism trainer who started her career in 1978 at The Philadelphia Inquirer. She is a 2002 recipient of a Knight International Journalism fellowship.
Loading...
or
Not Currently Available for Direct Purchase