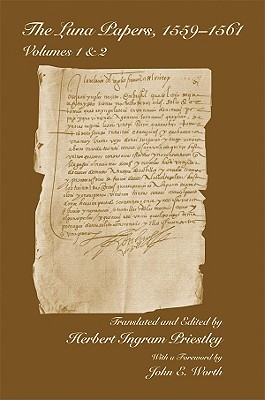 The 1559–1561 expedition of Don Tristán de Luna y Arellano to Florida was at the time of Spain’s most ambitious attempt yet to establish a colonial presence in southeastern North America. In June of 159, eleven ships carrying some five hundred soldiers and one thousand additional colonists, including not just Spaniards but also many of Aztec and African descent, sailed north from Veracruz, Mexico, on their way to the bay known then as Ochuse, and later as Pensacola. Finally arriving in mid-August, the colonists quickly sent word of their arrival back to Mexico and unloaded their supplies over the next five weeks, leaving vital food stores onboard the vessels until suitable warehouses could be constructed in the new settlement. When an unexpected hurricane struck on the night of September 19, 1559, however, seven of ten remaining vessels in Luna’s fleet were destroyed, and the expedition was instantaneously converted from a colonial venture to a mission in need of rescue.

Though ultimately doomed to failure by the hurricane that devastated their fleet and food stores, the Luna expedition nonetheless served as an immediate prelude to the successful establishment of a permanent colonial presence at St. Augustine on Florida’s Atlantic coast in 1565, and prefaced the eventual establishment after 1698 of three successive Spanish presidios at the same Pensacola Bay where Luna’s attempt had been made more than a century before.
This new publication of Herbert Priestley’s The Luna Papers marks the celebration by the modern city of Pensacola, Florida, of the 450th anniversary of Luna’s fateful colony.

"This is a work that should be read carefully by students of Spanish colonization. Seldom in recent years has a work of primary sources been as important as this been given to the public."
--The Hispanic American Historical Review

Herbert Ingram Priestley was Professor of Mexican History and Librarian of the Bancroft Library at the University of California in Berkeley when The Luna Papers: Volumbes 1 & 2 were originally published in 1928.

John W. Worth is Assistant Professor of Anthropology, University of West Florida.