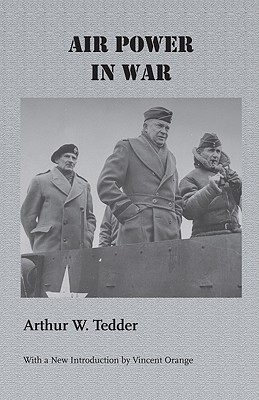 In addition to his achievements as Air Commander-in-Chief in the North African theater early in the war, Tedder’s most lasting contribution was as Deputy Supreme Commander under Dwight D. Eisenhower. He deserves much credit for keeping the Allied command functioning and harmonious. He was also the architect of the successful air strategy Eisenhower adopted for the Normandy invasion of 1944, which departed from both the British and American existing doctrine and models by concentrating on German rail systems rather than on either civilian or industrial targets.


Praise For Air Power in War…

“Tedder, who in England is accounted one of the wise men of aviation, in June 1941 became chief of an air domain that stretches now from Malta to the Persian Gulf and extends south to Madagascar. . . . His task was to build a bomber and fighter force in a theater that was considered subordinate to Britain yet covered far more territory and required a greater complexity of operations.”
—Time

Marshal of the Royal Air Force Arthur William Tedder, 1st Baron Tedder, GCB (July 11, 1890 – June 3, 1967) was a senior British air force commander. During World War I, he was a pilot and squadron commander in the Royal Flying Corps and he went on to serve as a senior officer in the Royal Air Force during the inter-war years. He held high command during World War II and after the War he served as Chief of the Air Staff before retiring from the RAF and taking up the Chancellorship of the University of Cambridge.