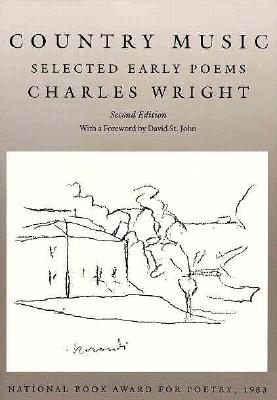 A compilation of powerful and moving poems from early in the poet's career. Co-winner of the 1983 National Book Award for Poetry, Country Music is comprised of eighty-eight poems selected from Charles Wright's first four books published between 1970 and 1977. From his first book, The Grave of the Right Hand, to the extraordinary China Trace, this selection of early works represents "Charles Wright's grand passions: his desire to reclaim and redeem a personal past, to make a reckoning with his present, and to conjure the terms by which we might face the future," writes David St. John in the forward. These poems, powerful and moving in their own right, lend richness and insight to Wright's recently collected later works. "In Country Music we see the same explosive imagery, the same dismantled and concentric (or parallel) narratives, the same resolutely spiritual concerns that have become so familiar to us in Wright's more recent poetry," writes St. John.

CHARLES WRIGHT was born in Pickwick Dam, Tennessee, and grew up in rural Tennessee and North Carolina. In addition to the four volumes selected from here, he published four volumes in the 1980s, which have been collected in The World of Ten Thousand Things: Poems 1980-1990. He is currently Professor of English at the University of Virginia in Charlottesville.
Loading...
or
Not Currently Available for Direct Purchase