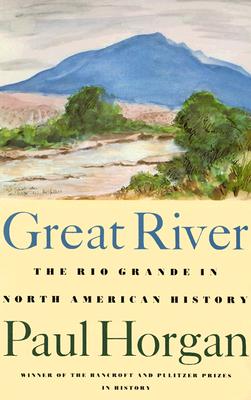 The Rio Grande in North American History. Vol. 1, Indians and Spain. Vol. 2, Mexico and the United States. 2 Vols. in

An epic history of the American southwest. Winner of the Pulitzer Prize for History (1954)
Winner of the Bancroft Prize in History (1954) Winner of both the Pulitzer Prize and Bancroft Prize for History, Great River was hailed as a literary masterpiece and enduring classic when it first appeared in 1954. It is an epic history of four civilizations--Native American, Spanish, Mexican, and Anglo-American--that people the Southwest through ten centuries. With the skill of a novelist, the veracity of a scholar, and the love of a long-time resident, Paul Horgan describes the Rio Grande, its role in human history, and the overlapping cultures that have grown up alongside it or entered into conflict over the land it traverses. Now in its fourth revised edition, Great River remains a monumental part of American historical writing.

PAUL HORGAN, novelist, historian, biographer, was one of this century's most gifted American authors. He trice won the Pulitzer Prize for History in a literary career spanning six decades. Born in Buffalo, New York, in 1903, he moved with his family in 1915 to Albuquerque, New Mexico. He was Professor Emeritus and Author-in-Residence at Wesleyan University until his death in 1995.
Loading...
or support indie stores by buying on