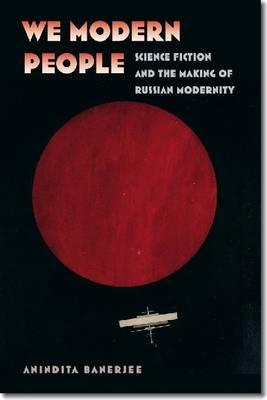 Science fiction emerged in Russia considerably earlier than its English version and instantly became the hallmark of Russian modernity. We Modern People investigates why science fiction appeared here, on the margins of Europe, before the genre had even been named, and what it meant for people who lived under conditions that Leon Trotsky famously described as "combined and uneven development." Russian science fiction was embraced not only in literary circles and popular culture, but also by scientists, engineers, philosophers, and political visionaries. Anindita Banerjee explores the handful of well-known early practitioners, such as Briusov, Bogdanov, and Zamyatin, within a much larger continuum of new archival material comprised of journalism, scientific papers, popular science texts, advertisements, and independent manifestos on social transformation. In documenting the unusual relationship between Russian science fiction and Russian modernity, this book offers a new critical perspective on the relationship between science, technology, the fictional imagination, and the consciousness of being modern. Hardcover is un-jacketed.

ANINDITA BANERJEE is an associate professor of comparative literature at Cornell University.
Loading...
or
Not Currently Available for Direct Purchase