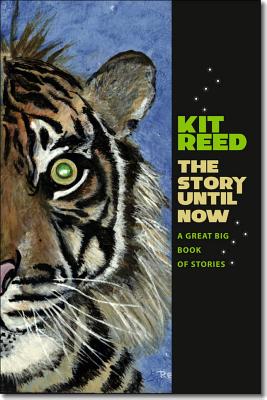 The Story Until Now (Hardcover)

A Great Big Book of Stories

Called "one of our brightest cultural commentators" by Publishers Weekly, Kit Reed draws from life--with a difference. This new collection brings together thirty-four of her strong, original stories, from early classics like "The Wait" and "Winter" to six never-before-collected short stories, including "The Legend of Troop 13" and "Wherein We Enter the Museum." An early favorite, "Automatic Tiger," is the first in a series of Reed's stories about animals. There's a monkey who grinds out bestsellers with the help of a "creative writing" app. Her uncanny black dog can enter a crowded room and sit down at the feet of the next man to die. Her characters confront war in various arenas: mother/daughter battles, the war of the sexes, the struggles of men scarred by war. Kit Reed's self-described "transgenred" fiction is confirmation of an "extraordinary talent" (The Financial Times). The range and complexity of her work speaks for itself in The Story Until Now.

KIT REED's novels include The Baby Merchant and Thinner Than Thou, which won an ALA Alex Award. Her newest is Son of Destruction. Often anthologized, her short stories have been nominated for the Nebula, the World Fantasy, and Shirley Jackson awards and the Tiptree Prize. A Guggenheim fellow and the first American recipient of a literary grant from the Abraham Woursell Foundation, she is the resident writer at Wesleyan University. Praise for Kit Reed "These stories shine with the incisive edginess of brilliant cartoons."--The New York Times Book Review (about Weird Women, Wired Women) "Reed has a prose style that's pure dry ice, displayed in dystopian stories that specialize in bitterness and dislocation."--The New York Times Book Review (about Dogs of Truth) "She is the SF writer par excellence of the war between the generations . . . Kit Reed frees us as we read her."--John Clute, Science Fiction Weekly (about Weird Women, Wired Women)
or
Not Currently Available for Direct Purchase
Copyright © 2020 American Booksellers Association