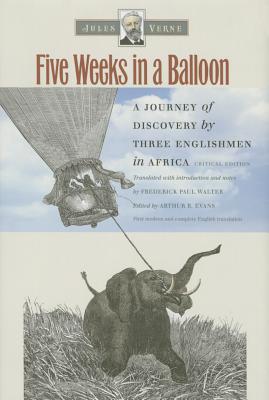 Five Weeks in a Balloon

One of the great "first novels" in world literature is now available in a complete, accurate English translation. Prepared by two of America's leading Verne scholars, Frederick Paul Walter and Arthur B. Evans, this edition honors not only Verne's farseeing science, but also his zest, style, and storytelling brilliance. Initially published in 1863, Five Weeks in a Balloon was the first novel in what would become the author's "Extraordinary Voyages" series. It tells the tale of a 4,000-mile balloon trip over the mysterious continent of Africa, a trip that wouldn't actually take place until well into the next century. Fusing adventure, comedy, and science fiction, Five Weeks has all the key ingredients of classic Verne: sly humor and cheeky characters, an innovative scientific invention, a tangled plot that's full of suspense and surprise, and visions of an unknown realm. As part of the Early Classics of Science Fiction series, this critical edition features extensive notes, all the illustrations from the original French edition, and a complete Verne biography and bibliography. Five Weeks in a Balloon will be a prized addition to libraries and science fiction reading lists, and a must-read for Verne fans and steampunk connoisseurs.

JULES VERNE (1828-1905) was the first author to popularize the literary genre that has become known as science fiction. FREDERICK PAUL WALTER is the translator of eight novels by Verne. Past vice-president of the North American Jules Verne Society and a former NPR scriptwriter and reference librarian, he lives in Albuquerque, New Mexico. ARTHUR B. EVANS is a professor of French at DePauw University and winner of the 2014 Cyrano prize for his scholarly contributions to the field of French science fiction. He has published numerous books and articles on Jules Verne and other early writers of French science fiction, serves as the managing editor of Science Fiction Studies, and is the general editor of Wesleyan's Early Classics of Science Fiction series.
or
Not Currently Available for Direct Purchase