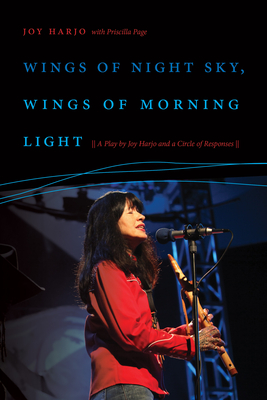 A Play by Joy Harjo and a Circle of Responses

Unique perspectives on the roots and reaches of contemporary Native Theater from the 2019 Poet Laureate of the United States Joy Harjo's play Wings of Night Sky, Wings of Morning Light is the centerpiece of this collection that includes essays and interviews concerning the roots and the reaches of contemporary Native Theater. Harjo blends storytelling, music, movement, and poetic language in Wings of Night Sky, Wings of Morning Light--a healing ceremony that chronicles the challenges young protagonist Redbird faces on her path to healing and self-determination. This text is accompanied by interviews with Native theater artists Rolland Meinholtz and Randy Reinholz, as well as an interview with Harjo, conducted by Page. The interviews highlight the lives and contributions of Meinholtz, a theater artist and educator who served as the drama instructor at the Institute of American Indian Arts from 1964-70 and a close mentor and friend to Harjo; and Reinholz, producing artistic director of Native Voices at the Autry, the nation's only Equity theater company dedicated exclusively to the development and production of new plays by Native American, First Nations, and Alaska Native playwrights. The new interview with Harjo focuses on her experiences working in theater. Essays on Harjo's work are provided by Mary Kathryn Nagle--an enrolled citizen of the Cherokee nation, playwright, and attorney who shares her insights on the legal and historical frameworks through which we can better understand the significance of Harjo's play; and Priscilla Page--writer, performer, and educator (of Wiyot heritage), who looks at indigenous feminism, jazz, and performance as influences on Harjo's theatrical work.

JOY HARJO became the first Native American to be named Poet Laureate of the United States in 2019. She is a member of the Mvskoke Nation. Her seven books of poetry, which include such well-known titles as Conflict Resolution for Holy Beings, In Mad Love and War, and She Had Some Horses. These titles and her memoir Crazy Brave have garnered many awards. PRISCILLA PAGE is a writer and dramaturg as well as a senior lecturer in the department of theater at the University of Massachusetts at Amherst.
Loading...
or support indie stores by buying on