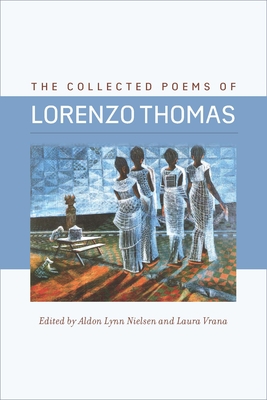 Song You asked me to sing
Then you seemed not
To hear; to have gone out
From the edge of my voice And I was singing
There I was singing
In a heathen voice
You could not hear
Though you requested The song--it was for them.
Although they refuse you
And the song I made for you
Tangled in their tongue They wd mire themselves in the spring
Rains, as I sit here folding and
Unfolding my nose in your gardens I wouldn't mind it so bad Each word is cheapened
In the air, sounding like
Language that riots and
Screams in the dark city Thoughts they requested
Concepts that rule them Since I can't have you
I will steal what you have Lorenzo Thomas (1944-2005) was the youngest member of the Society of Umbra, predecessor of the Black Arts Movement. The Collected Poems of Lorenzo Thomas is the first volume to encompass his entire writing life. His poetry synthesizes New York School and Black Arts aesthetics, heavily influenced by blues and jazz. In a career that spanned decades, Thomas constantly experimented with form and subject, while still writing poetry deeply rooted in the traditions of African American aesthetics. Whether drawing from his experiences during the war in Vietnam, exploring his life in the urban north and the southwest, or parodying his beloved Negritude ancestors, Thomas was a lyric innovator.

LORENZO THOMAS (1944-2005), was a critic and poet, and published volumes of scholarship as well as numerous essays, including several histories of the Umbra group. ALDON LYNN NIELSEN is the author of Integral Music: Languages of African American Innovation. He is the George and Barbara Kelly professor of American literature at Penn State University. LAURA VRANA is assistant professor of English specializing in African American literature and poetry at the University of South Alabama.
or
Buy Here
Copyright © 2020 American Booksellers Association