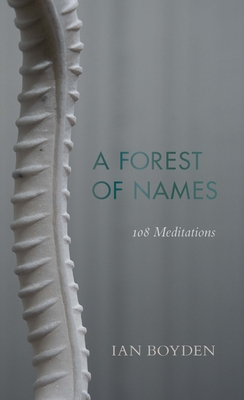 A Forest of Names

How do we honor the dead? How do we commit them to memory? And how do we come to terms with the way they died? To start, we can name them. When schools collapsed in an earthquake in China, burying over 5,000 children, the government brutally prevented parents from learning who had died. Artist Ai Weiwei, at risk to his own safety, gathered the names of these children, and their names are the subject of this book. Each poem is a poetic meditation on the image and concept suggested by the etymology in the Chinese characters. This act of poetic translation is both a heartbreaking tribute to people whose names have been erased, and a healing meditation on how language suggests a path forward.

He carried no iron into battle.
When he lifted his hand,
he brandished the sky.

IAN BOYDEN is a and writer, translator, and visual artist. Consistent across his productions are an intense interest in material relevance, place-based thought, and ecology, with a deep awareness of East Asian aesthetics. He studied for several years in China and Japan, and ultimately received degrees in art history from Wesleyan University and Yale University. His work is often interdisciplinary, including collaborations that have involved a variety of scientists, poets, composers, and other artists.
Loading...
or support indie stores by buying on