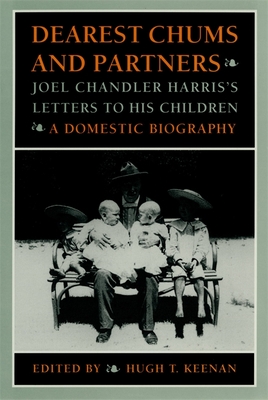 Joel Chandler Harris's Letters to His Children. a Domestic Biography

Formality in a friendly letter subjects the other person to all the rigors of a snow storm. With those words, Joel Chandler Harris kindly admonished his six children on how to write to him while they were off at school, on prolonged visits, or working away from home. In turn, Harris kept his offspring informed about his works in progress, current events, household activities, and the latest gossip. He sternly advised his four boys--especially the oldest, Julian--on how they should conduct their lives and careers. He regaled his two daughters--his "dearest chums and partners"--with skits and sketches.

In this volume, Hugh T. Keenan has collected the 280 surviving letters--most of them never before published--written by Harris to his children. In compiling this correspondence, Keenan uses Harris's own words to "fill in the domestic autobiography for the years 1890 to 1908," offering not only an intimate portrait of the author but also a compelling glimpse of the turn-of-the-century South in which he lived. The result is the most substantial book on Harris to be published in nearly twenty-five years. Harris's literary output during the period in which these letters were written was considerable. He produced thirteen books during the 1890s and contributed numerous short stories, essays, and articles to Scribner's and other national magazines; he was also deriving a steady income as associate editor for the Atlanta Constitution. Living in the West End section of Atlanta, he filled his letters with fascinating details of daily life, along with insights on such famous visitors to the city as James Whitcomb Riley, William Jennings Bryan, and James O'Neill. Dearest Chums and Partners also elucidates heretofore undisclosed aspects of the writer's personality and tastes, including his significant interest in the Roman Catholic Church. His French-Canadian wife, Esther LaRose Harris, was a devout Catholic, and their two daughters, Lillian and Mildred, attended convent school together. Many of the letters were mailed to the two girls at St. Joseph's Academy in Washington, Georgia. Because all incoming and outgoing mail was screened by the nuns, Harris developed a rapport with several of the sisters and wrote parts for them in skits he created for his daughters. Letters to his sons tended to be more instructive, although he would clarify his intent: "I am not lecturing, nor issuing orders. I am merely making suggestions." He advised Julian to keep a journal and to record his "experience and observation each day, and all the incidents that occur," adding, "To do this would seem monotonous to you now, but it would be invaluable to you later". In recording his own experiences and observations in these letters, Harris created a record of his last eighteen years that modern readers--especially those interested in the social and literary history of the South and in children's literature--will find invaluable.

Praise For Dearest Chums and Partners: Joel Chandler Harris's Letters to His Children. a Domestic Biography…

"Between 1890, when the last of his four sons and two daughters moved away from their childhood home in West End, Ga., and his death, Joel Chandler Harris (1848-1908) conducted a voluminous correspondence with his children. Keenan, an English professor at Georgia State, has compiled 280 of these invariably supportive, affectionate and often wise letters. Gossipy, occasionally coy, and laden with domestic minutiae, they trace Harris's growing interest in Roman Catholicism and provide a broad portrait of his Southern life.”--Publishers Weekly