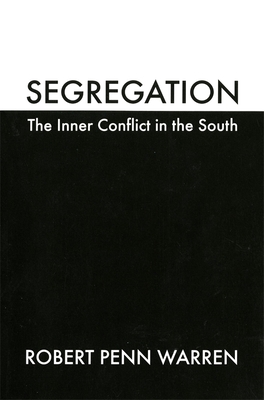 The Inner Conflict in the South (Brown Thrasher Books)

First published in 1956, Segregation is a collection of Robert Penn Warren's informal conversations with southerners in the wake of the Brown v. Board of Education decision. Warren, who in his own writing often explored the theme of race in American life, traveled through his native region to talk with scores of individuals - taxi drivers, NAACP leaders, members of White Citizens groups, college students, preachers - to report their responses to the Court's decision.


Praise For Segregation: The Inner Conflict in the South (Brown Thrasher Books)…

"Robert Penn Warren has done an admirable and moving piece. . . . To sensitive Southerners who read the book it will sound almost like a cry of anguish, as indeed it is."--New York Times Book Review

"It is doubtful that any other book has brought so sharply into focus the impact on the South of the court's action. Here the region's fears and hatreds stand out in vivid relief, as well as its nostalgic desires to maintain the best of its traditions in the face of indisputable, unaccepted knowledge that the past has irrevocably flown."--Catholic World

ROBERT PENN WARREN (1905-1989), America's first poet laureate, was the author of ten novels and sixteen volumes of poetry, as well as several works of nonfiction. His awards were numerous--three Pulitzer prizes, the Bollinger Prize, the National Book Award, a fellowship prize from the MacArthur Foundation, and the Presidential Medal of Freedom.
Loading...
or support indie stores by buying on