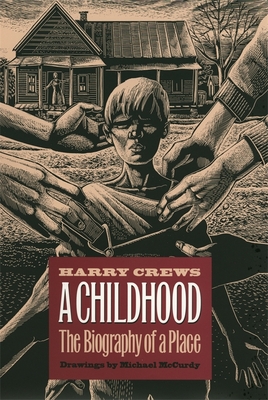 The Biography of a Place

A Childhood is the unforgettable memoir of Harry Crews' earliest years, a sharply remembered portrait of the people, locales, and circumstances that shaped him--and destined him to be a storyteller. Crews was born in the middle of the Great Depression, in a one-room sharecropper's cabin at the end of a dirt road in rural South Georgia. If Bacon County was a place of grinding poverty, poor soil, and blood feuds, it was also a deeply mystical place, where snakes talked, birds could possess a small boy by spitting in his mouth, and faith healers and conjure women kept ghosts and devils at bay.

At once shocking and elegiac, heartrending and comical, A Childhood not only recalls the transforming events of Crews's youth but conveys his growing sense of self in a world "in which survival depended on raw courage, a courage born out of desperation and sustained by a lack of alternatives." Amid portraits of relatives and neighbors, Bacon County lore, and details of farm life, Crews tells of his father's death; his friendship with Willalee Bookatee, the son of a black hired hand; his bout with polio; his mother and stepfather's failing marriage; his near-fatal scalding at a hog-killing; and a five-month sojourn in Jacksonville, Florida. These and other memories define, with reverence and affection, Harry Crews's childhood world: "its people and its customs and all its loveliness and all its ugliness." Imaginative and gripping, A Childhood re-creates in detail one writer's search for past and self, a search for a time and place lost forever except in memory.

Praise For A Childhood: The Biography of a Place…

"Crews is, obviously, a unique southern raconteur. . . . It's easy to despise poor folks. A Childhood makes it more difficult. It raises almost to a level of heroism these people who seem of a different century. A Childhood is not about a forgotten America, it is about a part of America that has rarely, except in books like this, been properly discovered."--New York Times Book Review

"It is Crews' great gift that he can show us how absolutely cursed, and alsolutely beautiful, we are. . . . Crews burns through the easy ways in which we would like to regard ourselves; what he leaves behind is something better, something touched by the refiner's fire.”--New York Newsday

HARRY CREWS (1935-2012) is the author of eighteen novels, including The Mulching of America, The Knockout Artist, and A Feast of Snakes. He was a professor at the University of Florida.
Loading...
or
Not Currently Available for Direct Purchase