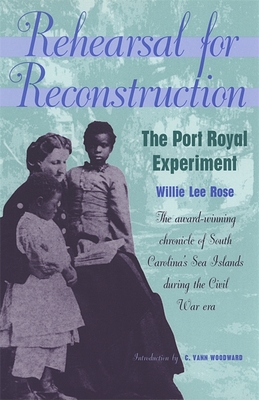 Just seven months into the Civil War, a Union fleet sailed into South Carolina's Port Royal Sound, landed a ground force, and then made its way upriver to Beaufort. Planters and farmers fled before their attackers, allowing virtually all their major possessions, including ten thousand slaves, to fall into Union hands.

Rehearsal for Reconstruction, winner of the Allan Nevins Prize, the Francis Parkman Prize, and the Charles S. Sydnor Prize, is historian Willie Lee Rose's chronicle of change in this Sea Island region from its capture in 1861 through Reconstruction. With epic sweep, Rose demonstrates how Port Royal constituted a stage upon which a dress rehearsal for the South's postwar era was acted out.

"A triumph of historical analysis [and] a detailed recreation of some of the Civil War's noblest hopes and greatest tragedies."--David Brion Davis

WILLIE LEE ROSE is the author of Rehearsal for Reconstruction, A Documentary History of Slavery in North America (both Georgia), and Slavery and Freedom. The Willie Lee Rose Prize, sponsored by the Southern Association for Women Historians, was established in her honor. It is awarded annually for the best book on any topic in southern history written by a woman (or women).
Loading...
or support indie stores by buying on