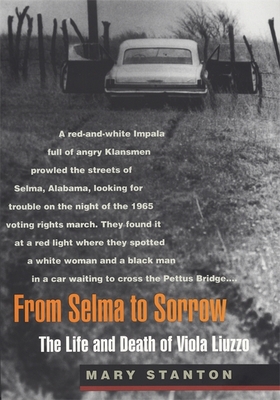 From Selma to Sorrow

More than thirty years after the murder of Viola Liuzzo by the Ku Klux Klan, she remains an enigma. Some saw her as a dedicated civil rights worker, others as a troubled housewife. Some thought she was a victim of random violence and government conspiracy, while others thought she was an unfit mother who got what she deserved.

From Selma to Sorrow is the first full-length biography of the only white woman honored at the Civil Rights Memorial in Montgomery. Born and reared in the South, Liuzzo moved to Detroit as an adult. At the time of her death she was married to a high-ranking Teamster and had five children. While a part-time student at Wayne State University she became involved in civil rights protests and decided to participate in a voting rights march in Selma, Alabama. On March 25, 1965, Liuzzo and a young black man named Leroy Moton were on their way from Selma to Montgomery after the march. Klansmen followed Liuzzo's car along Highway 80 for twenty miles, then pulled alongside and fired shots. Liuzzo was killed instantly and Moton, covered with her blood, escaped by pretending to be dead when the killers returned. Because this group of Klansmen included an FBI informant, Liuzzo lost her life in more ways than one. To deflect attention and to cover up his recklessness in permitting a known violent racist to work undercover during the march, J. Edgar Hoover crafted a malicious public relations campaign that unfairly portrayed Liuzzo as an unstable woman who abandoned her family to stir up trouble in the South. The years of unrelenting accusations, innuendos, and lies nearly destroyed her husband and five children. In From Selma to Sorrow Mary Stanton searches for the truth about Liuzzo's life and death, using extensive interviews, public records, and FBI case files to tell a startling story of murder, betrayal, and passion.

Praise For From Selma to Sorrow…

"A fascinating story of courage and commitment, dramatically told, as well as a sobering commentary on American government."--Howard Zinn, author of A People’s History of the United States

"Tragic and poignant . . . Mary Stanton superbly details the saga of a true American hero and how her own government sought to defame her."--Mary E. King, author of Freedom Song

"A work of careful research and fast-paced narrative. Engrossing, enlightening, and long overdue."--Wyn Craig Wade, author of The Fiery Cross

“Finally&#8212;more than thirty years after she was murdered by Klansmen on the Selma-to-Montgomery highway&#8212;we have Viola Liuzzo's story. Author Mary Stanton paints a portrait of an extraordinary woman, and at the same time, she provides an intriguing account of her search for the truth about Liuzzo and the circumstances of her death."--Morris Dees, Director of the Southern Poverty Law Center

"Fascinating . . . Should be a required text for anyone who believes prejudice and racism are figments of the black imagination or a thing of the past."--Charlotte Observer

"I hope that this beautifully realized book introduces this brave and committed woman to Americans of every age."--Fourth Genre

"Stanton’s fascinating story of a neglected civil rights hero is long overdue. . . . Stanton ably creates a portrait of a woman who was determined to have her life stand for something.”--Detroit News

MARY STANTON is the author of From Selma to Sorrow: The Life and Death of Viola Liuzzo and Journey toward Justice: Juliette Hampton Morgan and the Montgomery Bus Boycott (both Georgia); and Freedom Walk: Mississippi or Bust. She has taught at the University of Idaho, the College of St. Elizabeth in New Jersey, and Rutgers University.
Loading...
or support indie stores by buying on