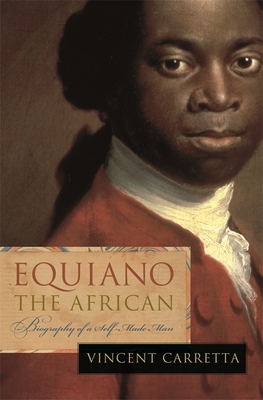 Biography of a Self-Made Man

This definitive biography tells the story of the former slave Olaudah Equiano (1745?-97), who in his day was the English-speaking world's most renowned person of African descent. Equiano's greatest legacy is his classic 1789 autobiography, The Interesting Narrative of the Life of Olaudah Equiano, or Gustavus Vassa, the African. A key document of the early movement to ban the slave trade, it includes the earliest known firsthand description by a slave of the horrific Middle Passage from Africa to the Americas. Equiano, the African is filled with fresh revelations about this many-sided figure--most notably that Equiano may have been born not in Africa, as he claimed, but in South Carolina.

For Vincent Carretta, such disconnects between the public persona and actual life of Equiano only increase his importance as a window into a number of complex, overlapping worlds. Equiano was a sailor, adventurer, entrepreneur, and jack-of-all-trades. Carretta distills years of scholarly detective work on Equiano's life and writings into a richly textured portrait of the man whose many transformations took him from slave to slave trader to anti-slave-trade advocate, and from pagan to Christian. This is "life and times" history at its best. Throughout, Carretta relates The Interesting Narrative to the historical record on Equiano, as well as to the century's economic, political, and religious undercurrents. Carretta argues that Equiano may have fabricated his African roots and his survival of the Middle Passage not only to sell more copies of his book but also to help advance the movement against the slave trade. Equiano, the African will leave readers with a fuller appreciation of the man's achievements and a deeper understanding of race and slavery in the Atlantic world.

Vincent Carretta, professor of English at the University of Maryland, is currently a senior fellow at Harvard University's W. E. B. Du Bois Institute for African and African American Research. His books include scholarly editions of the works of Equiano and of Equiano's contemporaries Ignatius Sancho, Ottobah Cugoano, and Phillis Wheatley.

Praise For Equiano, the African: Biography of a Self-Made Man…

"A remarkable man has been blessed with a superbly qualified biographer. Carretta knows more about Equiano than anyone alive, has carefully and respectfully edited his work, has boldly raised tantalizing questions about his origins, and has meticulously tracked down information about him that no one else has found. This book will be the authoritative source about Equiano's life for many years to come.”--Adam Hochschild, author of Bury the Chains: Prophets and Rebels in the Fight to Free an Empire's Slaves

"This biography provides an accurate, fair-minded, reliable, and engagingly written account of the life of the man whom Carretta describes justifiably as 'the most famous person of African descent in the Atlantic world.' In this rewarding study, Carretta invests the large store of erudition he has amassed from many years of assiduous study of Equiano's life and times. I know of no scholar who is as steeped in Equiano and no one who has done more to restore Equiano and his literary work to serious scholarly consideration."--William L. Andrews, University of North Carolina at Chapel Hill

"A bold, daring, and meticulously researched re-creation of the life and times of the founding father of both the African and the African American literary traditions. Carretta’s superbly written biography&#8212;certain to generate considerable discussion and debate&#8212;will change how we conceive of the remarkable contributions of the most important black man in the eighteenth century. This is one of the most significant biographies published about a black author in a very long time."--Henry Louis Gates Jr., W. E. B. Du Bois Professor of the Humanities, Harvard University

"With an impressive breadth of knowledge of the religious, literary, social, and cultural conditions of Equiano's time, Carretta's work in fourteen chapters frames an inquiry from which scholars of several disciplines will surely benefit. . . . truly engaging social and cultural contextualization."--Journal of African American History

"Provides a masterful, lively and scrupulously researched account that questions central parts of the ex-slaves narrative, but upholds his view of himself as a self-made man . . . Carretta's exemplary study offers not only the definitive biography of Equiano but also a first-rate social history of the late 18th century in America and in England."--Publishers Weekly (starred review)

"This is a thoroughly rich, engrossing, and well-researched portrait of an exceptional man and the cause he championed."--Booklist (starred review)

"Vassa remains a subject worthy of continued study and research . . . Carretta's biography is now the standard reference on the life and times of this 'African' intellectual."--Journal of Southern History