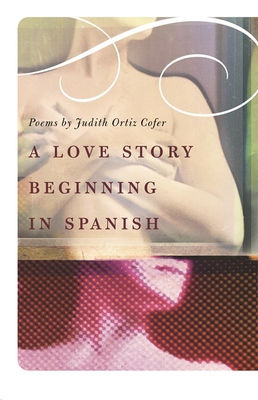 Judith Ortiz Cofer's third volume of poetry collects thirty-four poems written over the course of many years. In places as stark as a New Jersey barrio or fabled as the island home of Penelope and Odysseus, the people in these poems sometimes resist, sometimes reconcile, multiple cultures, tongues, and traditions as they navigate over ever-changing landscapes.

Judith Ortiz Cofer is The Regents' and Franklin Professor of English and Creative Writing at the University of Georgia.

Praise For A Love Story Beginning in Spanish…

"The poetry reads with the autobiographical clarity of an artist who has understood the development of her character and the birth of her art. This lucid self-knowledge shines from each of the poems in this collection."--Mark Jarman, author of Body and Soul: Essays on Poetry

"Cofer's poems 'make language from pure need.' Here she provides a kind of informal memoir through anecdote, nuanced detail, extended metaphor, and finally meditations on the function of language itself in forming identity. A Love Story Beginning in Spanish is the work of a mature poet, further evidence of her skill as a writer.”--Hilda Raz, author of Divine Honors and Trans

"Judith Ortiz Cofer is a poet whose music pervades my life long after I've finished reading. A Love Story Beginning in Spanish inspires me and heartens me."--Maxine Hong Kingston

"Judith Ortiz Cofer is a rarity among writers, consistently accomplished in both prose and poetry. A Love Story Beginning in Spanish only adds to an already-solid reputation of an artist who can unravel memory or anecdote into an experience that is sensory and intelligent."--El Paso Times

"Together, these poems enact their understanding of language, showing an intense attention to structure, sound, and sense."--Camille-Yvette Welsch, ForeWord

"The mark of a skilled poet, she goes beyond mere approximations to focus on the details of a situation, details that create a sense of environment as well as character. . . . beautifully written poems that carry a persuasive cultural beat."--Karla Parris, Spartanburg Herald-Journal

You don't have to be multilingual to delight in Cofer's poems. Her lingua franca speaks for the exile in all of us."--Candice Dyer, Atlanta Magazine