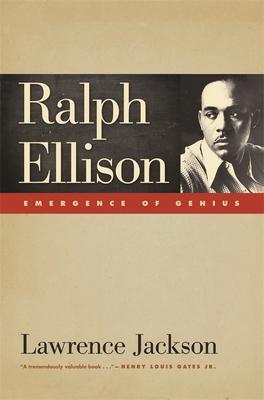 Author, intellectual, and social critic, Ralph Ellison (1914-94) was a pivotal figure in American literature and history and arguably the father of African American modernism. Universally acclaimed for his first novel, Invisible Man, a masterpiece of modern fiction, Ellison was recognized with a stunning succession of honors, including the 1953 National Book Award. Despite his literary accomplishments and political activism, however, Ellison has received surprisingly sparse treatment from biographers. Lawrence Jackson's biography of Ellison, the first when it was published in 2002, focuses on the author's early life.

Powerfully enhanced by rare photographs, this work draws from archives, literary correspondence, and interviews with Ellison's relatives, friends, and associates. Tracing the writer's path from poverty in dust bowl Oklahoma to his rise among the literary elite, Jackson explores Ellison's important relationships with other stars, particularly Langston Hughes and Richard Wright, and examines his previously undocumented involvement in the Socialist Left of the 1930s and 1940s, the black radical rights movement of the same period, and the League of American Writers. The result is a fascinating portrait of a fraternal cadre of important black writers and critics--and the singularly complex and intriguing man at its center.

"The more we know about Ellison's life, the better. Jackson's research into his life, his studies, and his experiences as a young man helps to illuminate not only the great writing that Ellison would produce later, but also the body of American literature created by his contemporaries. It's a tremendously valuable book."--Henry Louis Gates Jr., Harvard University

"[A] rich, meticulous biography . . . Jackson beautifully contextualizes Ellison, whether in Oklahoma, Alabama, or New York . . . While evoking each of Ellison's environments brilliantly, Jackson also discusses the influence of The Waste Land on Ellison's young mind. This kind of cultural and psychological insight makes for a very satisfying counterpart."--New York Times Book Review

"[A] discerning, thorough, and much needed biography."--Los Angeles Times

"In the late 1960s, the writer James Allan McPherson wrote a fine Atlantic Monthly article on Ralph Ellison. An article about the man—the fact that he had a listed phone number—the view of Harlem from his apartment. What Lawrence Jackson's Ralph Ellison: Emergence of Genius has done in such an exhaustive work is expanded thousands of times the intimate portrait of the Ellison I found in the article. It is an amazing and sensitive and superb book, very much worthy of one of the twentieth century's greats. Jackson has also given us a thorough and sharp analysis and assessment of Ellison's work. Those of us who will be forever moved and educated by Ellison will always be appreciative of what Jackson has done. His book will stand, for a long time, as the definitive portrait and analysis of a man from whom so many writers are descended."--Edward P. Jones, author of The Known World

Jackson's remarkable biography of Ralph Ellison is an essential contribution to the scholarship on one of the twentieth century's greatest writers. Painstakingly researched and exhaustive, this compelling portrait of Ellison clarifies his genius—and his intellectual era—for a new century."--Charles Johnson, author of Middle Passage

"This book is a powerful and pioneering treatment of the life and work of an American literary giant. Jackson deserves our praise."--Cornel West, author of Race Matters and Democracy Matters

"Jackson's painstaking documentation of Ralph Ellison's early life and the beginning of his literary career provides a much needed resource for Ellison's readers and critics."--Horace Porter, author of Jazz Country: Ralph Ellison in America

"Jackson's absorbing biography of Ralph Ellison makes a vital contribution to American literary history."--Ross Posnock, author of Color and Culture: Black Writers and the Making of the Modern Intellectual

Lawrence P. Jackson is an associate professor of African American studies and English at Emory University. He was awarded a Ford Foundation Fellowship and was Resident Fellow at Harvard's W. E. B. Du Bois Institute while completing this book.
Loading...
or support indie stores by buying on