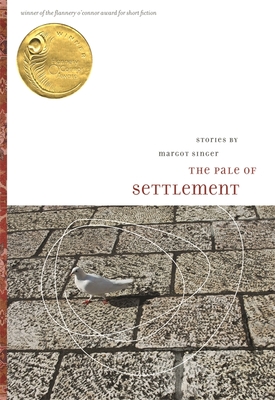 The Pale of Settlement

In settings from Jerusalem to Manhattan, from the archaeological ruins of the Galilee to Kathmandu, The Pale of Settlement gives us characters who struggle to piece together the history and myths of their family's past.

This collection of linked short stories takes its title from the name of the western border region of the Russian empire within which Jews were required to live during the late eighteenth and nineteenth centuries. Susan, the stories' main character, is a woman trapped in her own border region between youth and adulthood, familial roots in the Middle East and a typical American existence, the pull of Jewish tradition and the independence of a secular life. In "Helicopter Days," Susan discovers that the Israeli cousin she grew up with has joined a mysterious cult. "Lila's Story" braids Susan's memories of her grandmother--a German Jew arriving in Palestine to escape the Holocaust--with the story of her own affair with a married man and an invented narrative of her grandmother's life. In "Borderland," while trekking in Nepal, Susan meets an Israeli soldier who carries with him the terrible burden of his experience as a border guard in the Gaza Strip. And in the haunting title story, bedtime tales are set against acts of terrorism and memories of a love beyond reach. The stories of The Pale of Settlement explore the borderland between Israelis and American Jews, emigrants and expatriates, and vanished homelands and the dangerous world in which we live today.

Praise For The Pale of Settlement: Stories (Flannery O'Connor Award for Short Fiction #55)…

“What results is a lyrical, thoughtful, never trite reflection on Israel and Palestine that has won the Flannery O'Connor Award for Short Fiction. The book is written with a large audience in mind, and there is enough historical background and explanation for anyone to follow along. . . . Singer must be credited with fiercely considering a controversial topic and remaining true to language.”—Venus Zine

"Singer's seasoned and deeply moving interlinked stories about politics, memory and identity read more like the work of a veteran novelist and add up to one of the most astonishing literary debuts in recent memory. . . . With heartbreaking beauty, grace and wisdom, The Pale of Settlement offers us stories of the sort of penetrating novelistic depth rarely achieved in short fiction, recounting the forceful ways that the past, whether remote or near, urgently intrudes on the present."—Ranen Omer-Sherman, Miami Herald

"[Singer] deftly sets larger political themes next to smaller personal ones, as the daily choices her characters make reflect the larger forces that have set those characters and their ancestor into motion. . . . The linked short stories that make up The Pale of Settlement work far better than a more conventional narrative would in telling the tale of Susan's family."—Margaret Quamme, Columbus Dispatch

"Should reassure us that the short story remains a deliciously shape-shifting genre . . . The stories in The Pale of Settlement make a strong impression, offering a debut collection that is mature, confident, and haunting."—Catherine Browder, New Letters

"The triumph of Singer's The Pale of Settlement is that we enjoy the questions as much as any answers that might appear."—Alan Cheuse, NPR's All Things Considered

"Singer writes clearly, succinctly, and effectively. The characters are believable, and the stories uplifting but realistic. Modern issues—terrorism and the second Lebanon war—intrude, but do not overwhelm, a testament to Singer's skill and artistry."—Jewish Book World

"Margot Singer gives brave and eloquent voice to a new generation of Jewish wanderers in a global diaspora. In her stories, Israel is the first, enduring love, the place of origin and ending—but for many of her Israeli characters, a difficult and increasingly destructive love. The question of ‘home’ remains finally, dazzlingly, undecidable. Singer guides us, as one who knows, into the complex labyrinth of history where lives arise, and too often are unraveled. She is a marvel of a writer."—Judith Grossman, author of Her Own Terms

MARGOT SINGER is also the author of a novel, Underground Fugue. In addition, she is the coeditor, with Nicole Walker, of Bending Genre: Essays on Creative Nonfiction. She teaches creative writing at Denison University in Granville, Ohio.
Loading...
or support indie stores by buying on