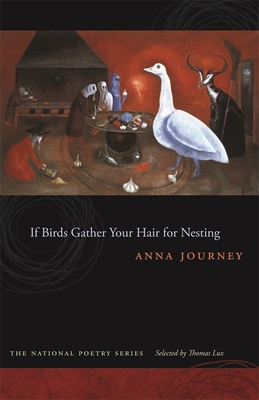 If Birds Gather Your Hair for Nesting (National Poetry) (Paperback)

In this debut collection, Anna Journey invites the reader into her peculiar, noir universe nourished with sex and mortality. Her poems are haunted by demons, ghosts, and even the living who wander exotic landscapes that appear at once threatening and seductive. In these poems, her sly speaker renames a pink hibiscus on display at Lowe's, "Lucifer's Panties"; another character chants, "I'd fall devil / over heels over edge over oleander"; and one woman writes a letter to the underworld:

Anna Journey is currently a PhD candidate in creative writing and literature at the University of Houston and a poetry editor for "Gulf Coast." Her poems have been published in a number of journals, including "American Poetry Review," "FIELD," and "Kenyon Review," and her essays have appeared in "Blackbird," "Notes on Contemporary Literature," and "Parnassus." In 2006, Journey discovered the unpublished status of Sylvia Plath's early sonnet "Ennui" and the influence of Fitzgerald's "The Great Gatsby" on it.

Praise For If Birds Gather Your Hair for Nesting (National Poetry)…

“Many female poets address sex in tones of victimhood, but Journey is downright predatory. Indeed, she's all about ecstasy in the original sense, meaning to leave your state of being. But if living to the fullest requires ecstasy, then it also requires a dose of death. Journey has her misgivings about this, which hints at a kind of existential sanity. That makes If Birds Gather Your Hair for Nesting a fabulous little book, the work of a young poet (I kept hearing bits of Wallace Stevens and Maxine Kumin) wise beyond her years.”—Los Angeles Times

“With these poems Journey flings the shop door wide open. She puts the needle on the record. She pumps up the bass."—Blackbird

"If Birds Gather Your Hair for Nesting is an audacious book written by a poet of wide erudition with a feverish and relentless imagination. Her experiments are actually new experiments. Her music will make your ear need to dance. And, on top of that, her poems make you want to read and read and read them!”--Thomas Lux, National Poetry Series judge

"In her spellbinding debut collection, Journey is the voice of that 'adorable siren' whose pleasurably startling images and exquisite perfect-pitch language recognize-no, bless that all 'cries want to be something else.' It is simply one of the most magnetic books I have read in a long time.”--Beckian Fritz Goldberg, author of The Book of Accident

"The tropic foliage of Anna Journey's book is so lushly ashimmer with invitation and threat that it's difficult to tell the two apart. Which is just what this poet intends: the world seduces us to enter, and to enter again, and to do so is both to find pleasure and to perish into a field of ghosts. Sexy, baroque, and southern to the core, this is a full-tilt splash of a debut."--Mark Doty, author of Fire to Fire: New and Selected Poems

"Anna Journey has talent to burn: gothic, elegiac, and celebratory by turns, her poems possess a giddy imaginative dexterity that is exceedingly rare in a debut collection. More important, there is a gravity and heft to her poems; they are willing to confront the Big Issues and militantly resist the easy tour de force. Jarrell says somewhere that a certain helplessness before her material is one of the poet’s principal tools. I hear that haunted helplessness in lines such as these: 'I can’t stop— / the story // going like the tongue goes: // lit and loosed, moving, / like Lucifer, / down.' Anna Journey is on the threshold of a significant career."--David Wojahn, author of Interrogation Palace: New and Selected Poems 1982-2004

"In digging up graves and rooting through the past, Anna Journey’s rich lines assert the writing of poetry as the vehicle that can change one’s luck, one’s history and future."—The Rumpus