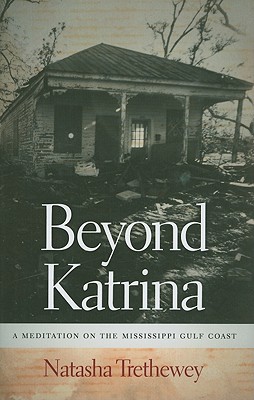 A Meditation on the Mississippi Gulf Coast

Beyond Katrina is poet Natasha Trethewey’s very personal profile of the Mississippi Gulf Coast and of the people there whose lives were forever changed by hurricane Katrina.

Trethewey spent her childhood in Gulfport, where much of her mother’s extended family, including her younger brother, still lives. As she worked to understand the devastation that followed the hurricane, Trethewey found inspiration in Robert Penn Warren’s book Segregation: The Inner Conflict in the South, in which he spoke with southerners about race in the wake of the Brown decision, capturing an event of wide impact from multiple points of view. Weaving her own memories with the experiences of family, friends, and neighbors, Trethewey traces the erosion of local culture and the rising economic dependence on tourism and casinos. She chronicles decades of wetland development that exacerbated the destruction and portrays a Gulf Coast whose citizens—particularly African Americans—were on the margins of American life well before the storm hit. Most poignantly, Trethewey illustrates the destruction of the hurricane through the story of her brother’s efforts to recover what he lost and his subsequent incarceration.

Renowned for writing about the idea of home, Trethewey’s attempt to understand and document the damage to Gulfport started as a series of lectures at the University of Virginia that were subsequently published as essays in the Virginia Quarterly Review. For Beyond Katrina, Trethewey has expanded this work into a narrative that incorporates personal letters, poems, and photographs, offering a moving meditation on the love she holds for her childhood home.


Praise For Beyond Katrina: A Meditation on the Mississippi Gulf Coast…

"Within this book's quiet thoughts lies a powerful story of things long gone that will never come back. What is lost can only be captured by memory. And Trethewey's prose captures memory with poetic precision." —W. Ralph Eubanks, All Things Considered

"By looking at the vast devastation with sober and poetic eyes, Trethewey has written a hauntingly beautiful book." —Publishers Weekly (starred review)

"Beyond Katrina: A Meditation on the Mississippi Gulf Coast is more about the storm’s sociological and psychological results for the Coast and its people, North Gulfport in particular, than its physical damage. But it’s seldom about generalizations...This is a powerful, sometimes painful, book that gets underneath comfortable memories — wherever the reader lives."
—Biloxi and South Mississippi Sun Herald

“With Bellocq’s Ophelia and Native Guard, Natasha Trethewey demonstrated an uncanny and urgent empathy for overlooked but crucial persons and events in the American past. Beyond Katrina extends that nuanced vision and compassion into multiple dimensions of the past, present, and future of this immeasurable national tragedy. It is a great interpretive pleasure and a significant emotional experience to follow her as she sifts the personal, historical, political, and geographic modes of experience to reveal what hurricane Katrina has meant—and can and must mean—for the Gulf Coast and the nation as a whole.”—Anthony Walton, author of Mississippi: An American Journey

"Beyond Katrina examines both the public and personal impact of the tragedy from the perspective of a writer uniquely qualified to undertake such a fraught and challenging project. She brings to the volume an insider’s knowledge and deep-felt affection for the place and its culture, but also an expatriate’s sense of wary detachment. On a grander scale, the book is permeated with the sense that memory and the past can only exist as ruin. This book offers continuing evidence that Natasha Trethewey is one of our most indispensable poets, and tell us as well that she is a prose writer of the first order."—David Wojahn, author of Interrogation Palace: New and Selected Poems 1982–2004

Natasha Trethewey is the Poet Laureate of the United States, 2012-2013. She is the author of three collections of poetry: "Domestic Work," "Bellocq's Ophelia," and "Native Guard," for which she was awarded the Pulitzer Prize. She also holds the Phillis Wheatley Distinguished Chair in Poetry at Emory University.