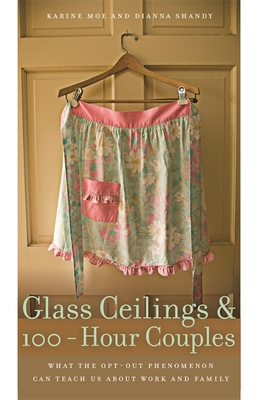 When significant numbers of college-educated American women began, in the early twenty-first century, to leave paid work to become stay-at-home mothers, an emotionally charged national debate erupted. Karine Moe and Dianna Shandy, a professional economist and an anthropologist, respectively, decided to step back from the sometimes overheated rhetoric around the so-called mommy wars. They wondered what really inspired women to opt out, and they wanted to gauge the phenomenon's genuine repercussions. Glass Ceilings and 100-Hour Couples is the fruit of their investigation--a rigorous, accessible, and sympathetic reckoning with this hot-button issue in contemporary life.

Drawing on hundreds of interviews from around the country, original survey research, and national labor force data, Moe and Shandy refocus the discussion of women who opt out from one where they are the object of scrutiny to one where their aspirations and struggles tell us about the far broader swath of American women who continue to juggle paid work and family. Moe and Shandy examine the many pressures that influence a woman's decision to resign, reduce, or reorient her career. These include the mismatch between child-care options and workplace demands, the fact that these women married men with demanding careers, the professionalization of stay-at-home motherhood, and broad failures in public policy. But Moe and Shandy are equally attentive to the resilience of women in the face of life decisions that might otherwise threaten their sense of self-worth. Moe and Shandy find, for instance, that women who have downsized their careers stress the value of social networks--of "running with a pack of smart women" who've also chosen to emphasize motherhood over paid work.

Karine Moe (Author) KARINE MOE is a professor of economics at Macalester College. She is the editor of Women, Family, and Work: Writings on the Economics of Gender. Dianna Shandy (Author) DIANNA SHANDY is an associate professor of anthropology at Macalester College. She is the author of Nuer-American Passages: Globalizing Sudanese Migration.
Loading...
or support indie stores by buying on