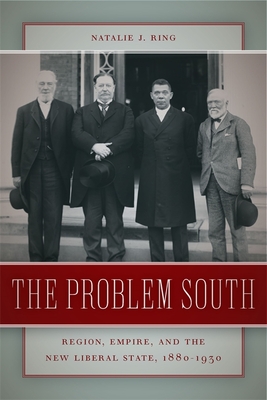 Region, Empire, and the New Liberal State, 1880-1930 (Politics and Culture in the Twentieth-Century South)

For most historians, the late nineteenth and early twentieth centuries saw the hostilities of the Civil War and the dashed hopes of Reconstruction give way to the nationalizing forces of cultural reunion, a process that is said to have downplayed sectional grievances and celebrated racial and industrial harmony. In truth, says Natalie J. Ring, this buoyant mythology competed with an equally powerful and far-reaching set of representations of the backward Problem South--one that shaped and reflected attempts by northern philanthropists, southern liberals, and federal experts to rehabilitate and reform the country's benighted region. Ring rewrites the history of sectional reconciliation and demonstrates how this group used the persuasive language of social science and regionalism to reconcile the paradox of poverty and progress by suggesting that the region was moving through an evolutionary period of "readjustment" toward a more perfect state of civilization.

In addition, The Problem South contends that the transformation of the region into a mission field and laboratory for social change took place in a transnational moment of reform. Ambitious efforts to improve the economic welfare of the southern farmer, eradicate such diseases as malaria and hookworm, educate the southern populace, "uplift" poor whites, and solve the brewing "race problem" mirrored the colonial problems vexing the architects of empire around the globe. It was no coincidence, Ring argues, that the regulatory state's efforts to solve the "southern problem" and reformers' increasing reliance on social scientific methodology occurred during the height of U.S. imperial expansion.

NATALIE J. RING is an assistant professor of history at the University of Texas at Dallas. She is coeditor, with Stephanie Cole, of The Folly of Jim Crow: Rethinking the Segregated South.
Loading...
or support indie stores by buying on