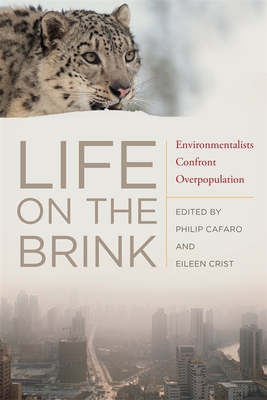 Life on the Brink (Paperback)

Life on the Brink aspires to reignite a robust discussion of population issues among environmentalists, environmental studies scholars, policymakers, and the general public. Some of the leading voices in the American environmental movement restate the case that population growth is a major force behind many of our most serious ecological problems, including global climate change, habitat loss and species extinctions, air and water pollution, and food and water scarcity. As we surpass seven billion world inhabitants, contributors argue that ending population growth worldwide and in the United States is a moral imperative that deserves renewed commitment.

Philip Cafaro (Editor) PHILIP CAFARO is an assistant professor of philosophy at Colorado State University, Fort Collins, Colorado. Eileen Crist (Editor) EILEEN CRIST is an associate professor in the Department of Science and Technology in Society at Virginia Tech. Her books include Gaia in Turmoil: Climate Change, Biodepletion, and Earth Ethics in an Age of Crisis.

Praise For Life on the Brink: Environmentalists Confront Overpopulation…

“The desire for families is built into our genes; and since people have a right to reproduce, more people living a more abundant life is a perennial hope. But seven billion and escalating to ten or twelve? Too many people is arguably the most serious problem on the world agenda—for the adverse effects on human flourishing, on land health, and on biodiversity. . . . Cafaro and Crist have gathered much of the best recent work analyzing these daunting issues. In the new millennium no one can claim to be well educated, or moral, without facing ‘life on the brink.’”—Holmes Rolston III, Colorado State University

“For decades, overpopulation deniers have claimed that those who advocate population stabilization or reduction do so to retain privileges; are motivated by racist, sexist, or colonialist views; or do not understand economics. Life on the Brink courageously argues that intelligent and compassionate action in our world demands that we reduce our numbers as quickly and humanely as possible. Its urgent message should be widely read and acted upon.”—Bron Taylor, author of Dark Green Religion: Nature Spirituality and the Planetary Future

"In this challenging anthology, coeditors Philip Cafaro and Eileen Crist, together with some two dozen contributors, resolutely confront what until quite recently has been the 'toxic third rail' in far too many discussions of humanity's environmental past, present, and future. The book's principal concern and recurrent theme is how 'wild nature,' the totality of life's biological diversity, ecological complexity, and evolutionary dynamism, will survive and flourish in the face of a rapidly expanding global human enterprise (i.e., modern agricultural/industrial/technological civilization). As the title suggests, confronting ongoing population growth is of critical importance. Simply stated, the authors persuasively argue that global human numbers—along with excessive per capita consumption—must initially be slowed, then stabilized, and subsequently reduced as rapidly and as humanely possible to levels consistent with the earth's longer-term sustainable carrying capacity, a number that may well turn out to be in the one to three billion range."—J. Kenneth Smail, professor emeritus of anthropology, Kenyon College

"Life on the Brink is a timely and valuable volume, bringing together an impressive set of cutting-edge essays by leading scholars from a wide range of disciplines. The essays address human population growth and issues associated with it from a variety of important (and all-too-often overlooked) perspectives. The work here is empirically well grounded and goes well beyond tired claims that overconsumption is the problem of the wealthy nations, while overpopulation is the problem of those that are developing, or that 'business-as-usual' development alone will inevitably lead to a desirable outcome for the human population. Cafaro and Crist have brought together a volume that will be of great interest for any scholars working on development, population, and environmental issues; indeed, most all of the essays would also be very useful in advanced undergraduate or graduate courses in these areas."—Jason Kawall, associate professor of philosophy and environmental studies, Colgate University

"All of the diverse threats to biological diversity are ultimately caused by an increasing human population and a rising standard of living. In Life on the Brink, the authors ask us to consider that the major environmental, social, and economic problems of the world could be dealt with more easily if the human population stabilized or even began to shrink. This is a bold statement by leaders who are not afraid of speaking the truth about how to protect nature."—Richard B. Primack, author of Essentials of Conservation Biology

“Any environmental science or social issues collection will find Life on the Brink packs in much food for classroom discussion, debate, and thought.”—Midwest Book Review