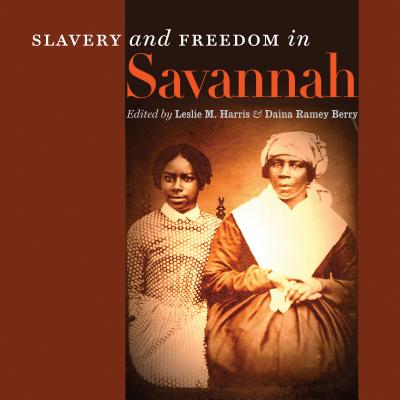 Slavery and Freedom in Savannah

Slavery and Freedom in Savannah is a richly illustrated, accessibly written book modeled on the very successful Slavery in New York, a volume Leslie M. Harris coedited with Ira Berlin. Here Harris and Daina Ramey Berry have collected a variety of perspectives on slavery, emancipation, and black life in Savannah from the city's founding to the early twentieth century. Written by leading historians of Savannah, Georgia, and the South, the volume includes a mix of longer thematic essays and shorter sidebars focusing on individual people, events, and places.

The story of slavery in Savannah may seem to be an outlier, given how strongly most people associate slavery with rural plantations. But as Harris, Berry, and the other contributors point out, urban slavery was instrumental to the slave-based economy of North America. Ports like Savannah served as both an entry point for slaves and as a point of departure for goods produced by slave labor in the hinterlands. Moreover, Savannah's connection to slavery was not simply abstract. The system of slavery as experienced by African Americans and enforced by whites influenced the very shape of the city, including the building of its infrastructure, the legal system created to support it, and the economic life of the city and its rural surroundings. Slavery and Freedom in Savannah restores the urban African American population and the urban context of slavery, Civil War, and emancipation to its rightful place, and it deepens our understanding of the economic, social, and political fabric of the U.S. South. This project is made possible by a grant from the U.S. Institute of Museum and Library Services. This volume is published in cooperation with Savannah's Telfair Museum and draws upon its expertise and collections, including Telfair's Owens-Thomas House. As part of their ongoing efforts to document the lives and labors of the African Americans--enslaved and free--who built and worked at the house, this volume also explores the Owens, Thomas, and Telfair families and the ways in which their ownership of slaves was foundational to their wealth and worldview.

Leslie M. Harris (Editor) LESLIE M. HARRIS is a professor of history at Northwestern University. She is the coeditor, with Ira Berlin, of Slavery in New York and the coeditor, with Daina Ramey Berry, of Slavery and Freedom in Savannah (Georgia). Daina Ramey Berry (Editor) DAINA RAMEY BERRY is the Oliver H. Radkey Professor of History and African and African Diaspora Studies at the University of Texas at Austin. She is the author of The Price for their Pound of Flesh: The Value of the Enslaved, from Womb to Grave, in the Building of a Nation and Swing the Sickle for the Harvest Is Ripe: Gender and Slavery in Antebellum Georgia.
Loading...
or support indie stores by buying on