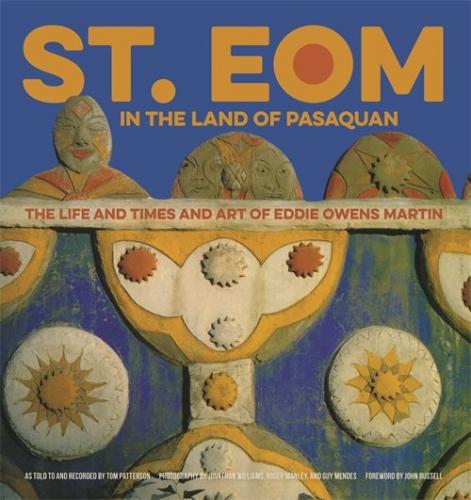 St. Eom in the Land of Pasaquan (Hardcover)

The Life and Times and Art of Eddie Owens Martin

Self-taught Georgia artist Eddie Owens Martin (1908-86), known as St. EOM, created a visionary art site called Pasaquan in the mid-1950s in Marion County, Georgia. Covering seven acres, this evocative and fanciful site has captured the imaginations of thousands of visitors. Pasaquan includes six buildings connected by concrete walls, all of which are adorned with the artist's vibrant, psychedelic folk art of bold, transfixing patterns, spiritual and tribal imagery, and exuberant depictions of nature.

According to St. EOM, his art arose from a vision he experienced in his mid-twenties, while suffering from a high fever. The first of many visionary experiences, it featured a godlike being who offered to be Martin's spiritual guide. Subsequent visions inspired him to begin making art and, eventually, to create a spiritual compound dedicated to a peaceful future for humankind. St. EOM enlarged his house to twice its original size by adding a long rear section covered inside and out with his rainbow-hued murals, mandalas, and relief sculptures. On the grounds he built a series of structures including a circular dance platform, some small temples, several totems, and a two-story pagoda, all in his wildly ornamental style. He also created more than two thousand freestanding pieces, including paintings, sculptures, and drawings.

In the thirty years since St. EOM's death, the Pasaquan Preservation Society worked to preserve the compound, which had fallen into neglect. In 2014 the Kohler Foundation and Columbus State University partnered with the society to restore the visionary art site for future generations. It is now listed on the National Register of Historic Places.