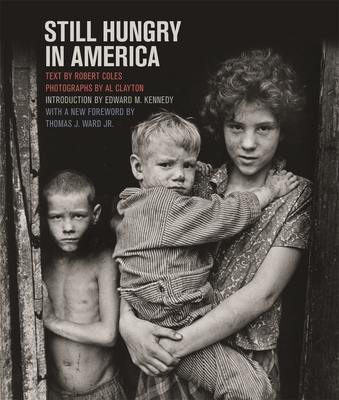 Originally published in 1969, the documentary evidence of poverty and malnutrition in the American South showcased in Still Hungry in America still resonates today. The work was created to complement a July 1967 U.S. Senate Subcommittee on Employment, Manpower, and Poverty hearings on hunger in America. At those hearings, witnesses documented examples of deprivation afflicting hundreds of thousands of American families. The most powerful testimonies came from the authors of this profoundly disturbing and important book.

Al Clayton's sensitive camerawork enabled the subcommittee members to see the agonizing results of insufficient food and improper diet, rendered graphically in stunted, weakened and fractured bones, dry, shrunken, and ulcerated skin, wasting muscles, and bloated legs and abdomens. Physician and child psychiatrist Robert Coles, who had worked with these populations for many years, described with fierce clarity the medical and psychological effects of hunger. Coles's powerful narrative, reinforced by heartbreaking interviews with impoverished people and accompanied by 101 photographs taken by Clayton in Appalachia, rural Mississippi, and Atlanta, Georgia, convey the plight of the millions of hungry citizens in the most affluent nation on earth. A new foreword by historian Thomas J. Ward Jr. analyzes food insecurity among today's rural and urban poor and frames the current crisis in the American diet not as a scarcity of food but as an overabundance of empty calories leading to obesity, diabetes, and high blood pressure.

Robert Coles (Author) ROBERT COLES is a professor emeritus at Harvard University and the author of Children of Crisis: A Study of Courage and Fear. His work has won numerous prizes, including a Pulitzer Prize, a MacArthur Award, the Presidential Medal of Freedom, and the National Humanities Medal. Al Clayton (By (photographer)) AL CLAYTON (1934-2014) was one of America's outstanding photographers and a founding member of the Southern Foodways Alliance. His photographs have appeared in such publications as LOOK, the Atlantic Monthly, TIME, and Newsweek.
Loading...
or support indie stores by buying on