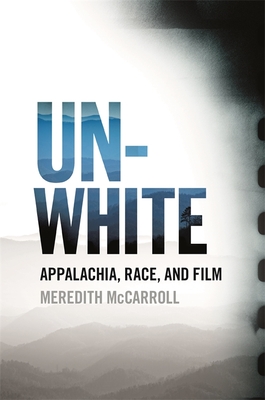 Appalachia resides in the American imagination at the intersections of race and class in a very particular way, in the tension between deep historic investments in seeing the region as "pure white stock" and as deeply impoverished and backward. Meredith McCarroll's Unwhite analyzes the fraught location of Appalachians within the southern and American imaginaries, building on studies of race in literary and cinematic characterizations of the American South. Not only do we know what "rednecks" and "white trash" are, McCarroll argues, we rely on the continued use of such categories in fashioning our broader sense of self and other. Further, we continue to depend upon the existence of the region of Appalachia as a cultural construct. As a consequence, Appalachia has long been represented in the collective cultural history as the lowest, the poorest, the most ignorant, and the most laughable community. McCarroll complicates this understanding by asserting that white privilege remains intact while Appalachia is othered through reliance on recognizable nonwhite cinematic stereotypes.

Unwhite demonstrates how typical characterizations of Appalachian people serve as foils to set off and define the "whiteness" of the non-Appalachian southerners. In this dynamic, Appalachian characters become the racial other. Analyzing the representation of the people of Appalachia in films such as Deliverance, Cold Mountain, Medium Cool, Norma Rae, Cape Fear, The Killing Season, and Winter's Bone through the critical lens of race and specifically whiteness, McCarroll offers a reshaping of the understanding of the relationship between racial and regional identities.

MEREDITH McCARROLL is the director of writing and rhetoric at Bowdoin College. She was born and raised in Western North Carolina and earned her PhD at University of Tennessee.
or
Buy Here
Copyright © 2020 American Booksellers Association