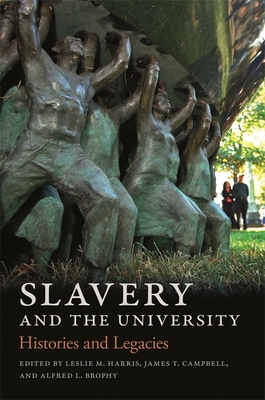 Slavery and the University

Slavery and the University is the first edited collection of scholarly essays devoted solely to the histories and legacies of this subject on North American campuses and in their Atlantic contexts. Gathering together contributions from scholars, activists, and administrators, the volume combines two broad bodies of work: (1) historically based interdisciplinary research on the presence of slavery at higher education institutions in terms of the development of proslavery and antislavery thought and the use of slave labor; and (2) analysis on the ways in which the legacies of slavery in institutions of higher education continued in the post-Civil War era to the present day.

The collection features broadly themed essays on issues of religion, economy, and the regional slave trade of the Caribbean. It also includes case studies of slavery's influence on specific institutions, such as Princeton University, Harvard University, Oberlin College, Emory University, and the University of Alabama. Though the roots of Slavery and the University stem from a 2011 conference at Emory University, the collection extends outward to incorporate recent findings. As such, it offers a roadmap to one of the most exciting developments in the field of U.S. slavery studies and to ways of thinking about racial diversity in the history and current practices of higher education.

Leslie M. Harris (Editor) LESLIE M. HARRIS is a professor of history at Northwestern University. She is the coeditor, with Ira Berlin, of Slavery in New York and the coeditor, with Daina Ramey Berry, of Slavery and Freedom in Savannah (Georgia). James T. Campbell (Editor) JAMES T. CAMPBELL is the Edgar E. Robinson Professor in U.S. History at Stanford University. He is the author of Middle Passages: African American Journeys to Africa, 1787-2005. Alfred L. Brophy (Editor) ALFRED L. BROPHY is the D. Paul Jones Chairholder in Law at the University of Alabama School of Law in Tuscaloosa. He is the author or editor of numerous books, including Reconstructing the Dreamland: The Tulsa Riot of 1921, Race, Reparations, Reconciliation; Reparations: Pro and Con; and University, Court, and Slave: Proslavery Thought in Southern Colleges and Courts and the Coming of Civil War. In 2004 he authored an apology for slavery at the University of Alabama, which was passed by the Faculty Senate and is believed to be the first of its kind in the United States.
Loading...
or support indie stores by buying on