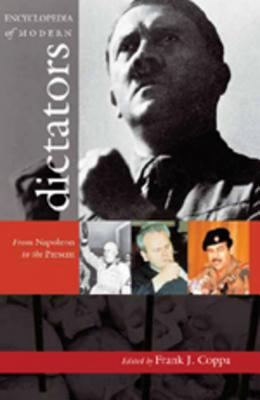 From Napoleon to the Present

Dictators are not new phenomena, but within the past two centuries they have dramatically proliferated not only in Europe, which witnessed the rise and fall of fascism and communism, but also in the Middle East, Africa, Asia, and Latin America, where military as well as ideological dictators have emerged. This concise one-volume encyclopedia provides entries on most if not all of the dictators who have emerged worldwide since the time of Napoleon. Arranged in an A-Z format, these entries provide the basic facts on the formation and development of the dictatorships as well as references for further reading. The volume will prove indispensable to high school and college students as well as librarians wanting to know more about these individuals, many of whom are not included in the older biographical studies.
Dictators discussed include: Pol Pot, Mao Zedong, Ho Chi Minh, Ferdinand Marcos, Napoleon Bonaparte, Maximilien Robespierre, Antonio de Salazar, Slobodan Milosevich, Muammar al Quaddafi, Josef Stalin, Leonid Brezhnev, Juan Per n, Manuel Noriega, Fulgencio Battista, Saddam Hussein, Adolf Hitler, and many more. Over thirty dramatic photos and a comprehensive index are included.

The Editor: Frank J. Coppa received his M.A. and his Ph.D. from the Catholic University of America in Washington, D.C., and he is currently Professor of History and the Director of Doctoral Studies in Modern World History at St. John's University in New York. He has written and edited more than a dozen volumes on united Italy and the modern Papacy, including Dictionary of Modern Italian History (editor, 1985) and Encyclopedia of the Vatican and the Papacy (editor, 1999), among others.
Loading...
or
Not Currently Available for Direct Purchase