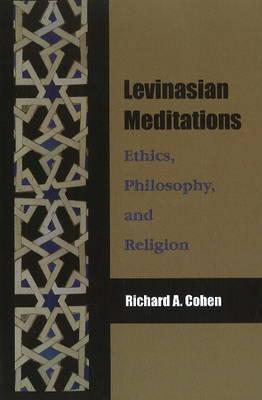 A prominent scholar of the life and work of Emmanuel Levinas, Richard A. Cohen collects in this volume the most significant of his writings on Levinas over the past decade. With these essays, Cohen not only clearly explains the nuances of Levinas's project, but he attests to the importance of Levinas's distinctive insights for philosophy and religion. Divided into two parts, the book's part one considers Levinas's philosophical project by bringing him into dialogue with Western thought, including Plato, Aristotle, Kant, even Shakespeare, as well as twentieth century thinkers such as Heidegger, Husserl, Sartre, and Buber among others. In part two, Cohen addresses Levinas's contribution to religious thought, particularly regarding his commentary on and approach to Judaism, by using the interpretive lens of Levinas's talmudic writing, "A Religion for Adults." Throughout the book, these seminal essays provide a thorough illumination of Levinas's most original insight and significant contribution to Husserlian phenomenology -- which permeates both his philosophical and religious works -- that signification and meaning are ultimately based on an ethically structured intersubjectivity that cannot be understood in terms of language and being. Cohen succeeds in defending and clarifying Levinas's commitment to the primacy of ethics, his "ethics as first philosophy," which was the hallmark of the French phenomenologist's intellectual career.

RICHARD A. COHEN is professor of philosophy and director of the Institute of Jewish Thought and Heritage at the University at Buffalo. He is the author of Elevations: The Height of the Good in Rosenzweig and Levinas and Ethics, Exegesis and Philosophy: Interpretation after Levinas. He has also translated a number of Levinas's works including Ethics and Infinity, Time and the Other, New Talmudic Readings, and Discovering Existence with Husserl (with Michael B. Smith).
Loading...
or
Not Currently Available for Direct Purchase