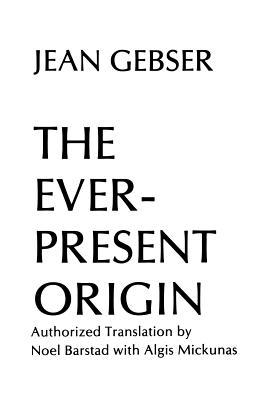 Part One: Foundations Of The Aperspectival World

This English translation of Gebser’s major work, Ursprung und Gegenwart (Stuttgart, Deutsche Verlag, 1966), offers certain fundamental insights which should be beneficial to any sensitive scientist and makes it available to the English-speaking world for the recognition it deserves.

“The path which led Gebser to his new and universal perception of the world is, briefly, as follows. In the wake of materialism and social change, man had been described in the early years of our century as the “dead end” of nature. Freud had redefined culture as illness—a result of drive sublimation; Klages had called the spirit (and he was surely speaking of the hypertrophied intellect) the “adversary of the soul,” propounding a return to a life like that of the Pelasgi, the aboriginal inhabitants of Greece; and Spengler had declared the “Demise of the West” during the years following World War I. The consequences of such pessimism continued to proliferate long after its foundations had been superseded.

It was with these foundations—the natural sciences—that Gebser began. As early as Planck it was known that matter was not at all what materialists had believed it to be, and since 1943 Gebser has repeatedly emphasized that the so-called crisis of Western culture was in fact an essential restructuration.…

Gebser has noted two results that are of particular significance: first, the abandonment of materialistic determinism, of a one-sided mechanistic-causal mode of thought; and second, a manifest “urgency of attempts to discover a universal way of observing things, and to overcome the inner division of contemporary man who, as a result of his one-sided rational orientation, thinks only in dualisms.”

Against this background of recent discoveries and conclusions in the natural sciences Gebser discerned the outlines of a potential human universality. He also sensed the necessity to go beyond the confines of this first treatise so as to include the humanities (such as political economics and sociology) as well as the arts in a discussion along similar lines. This was the point of departure of The Ever-Present Origin.

From In memoriam Jean Gebser by Jean Keckeis


Praise For The Ever-Present Origin: Part One: Foundations Of The Aperspectival World…

“Gebser’s noetic analysis, of Teilhardian scope, is only partially equaled by such works as Erich Neumann’s The Origins and History of Consciousness or Gaston Bachelard’s The Philosophy of No. A profound and sagaciously polemic work, remarkably relevant to discussions of holism and postmodern consciousness.”—Library Journal

“Jean Gebser’s magnum opus is at long last available in a fine English rendering … I expect no less an interest in the English translation, and hope that Gebser’s work will now begin to receive the worldwide recognition it deserves.”—Emergent Paradigm Bulletin

“(The book) impressed me as a very important, indeed in some respects pioneering, piece of work. It treads new paths, opens new vistas, and in so doing it is vastly, solidly, and subtly documented by a wealth of anthropological, mythological, linguistic, artistic, philosophical, and scientific material which is fruitfully brought into play and shown in its multifold and striking interrelationships. The book is brilliantly written and introduces many valuable new terms and distinctions. (It shows) that scholarly precision and faithfulness to given data are fully compatible with a broad, imaginative, and spiritual outlook; and (it exposes) the utter sterility of the prevailing positivistic, mechanistic, and wrongfully scientistic methods.”—Erich Kahler, author of Man the Measure, The Tower and the Abyss, The Orbit of Thomas Mann

“The gigantic attempt of one of the most creative and stimulating thinkers of modern Europe to integrate the most advanced knowledge of our time with the spiritual sources of the past.”—Lama Anagarika Govinda, author of The Way of th

Jean Gebser (1905–1973) was lecturer at the Institute of Applied Psychology in Zürich and honorary Professor of Comparative Studies of Civilization at the University of Salzburg. For his many publications, he received several prizes, including a share of the German Schiller prize, the literary award of the Esslingen Artist’s Guild, the Koggen prize of the City of Minden, and the literary award of the City of Berne.