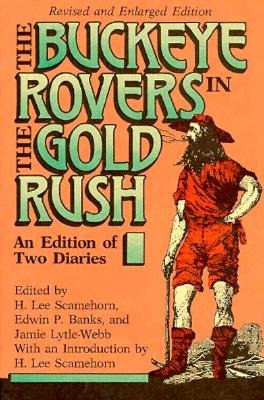 Buckeye Rovers in the Gold Rush

An Edition Of Two Diaries

When “California Fever” raced through southeastern Ohio in the spring of 1849, a number of residents of Athens County organized a cooperative venture for traveling overland to the mines. Known as the “Buckeye Rovers,” the company began its trip westward in early April. The Buckeye Rovers, along with thousands who traveled the overland route to California, endured numerous hardships and the seemingly constant threat of attacks from hostile Indians. On reaching their destination, the Ohioans discovered that rich deposits of gold were extremely rare, and that except for a few lucky fortune–seekers, mining required hard physical labor and yielded small rewards. They persisted nonetheless and most of the company returned to Athens in late 1851 or early 1852 with modest fortunes.

The arduous experiences of the overland trek were recorded by two Buckeye Rover diarists. The more compete account was compiled by John Banks. He wrote effusively while on the trail and throughout his stay of more than two years in the gold regions. J. Elza Armstrong, by contrast, was brief, even laconic, and his journal ended upon reaching California. The contrast between the two brings into focus the divergent personalities who were drawn to California by the lure of gold.

A nine–month segment of Bank’s diary, from February to November, 1851, had been missing at the time the story of the Buckeye Rovers was first published in 1965. This revised and enlarged edition contains the complete diaries. They offer valuable record of the Buckeyes’ adventures from the time they left home until the time they departed California for the return trip to Ohio.


Praise For Buckeye Rovers in the Gold Rush: An Edition Of Two Diaries…

“Scamehorn has carefully and thoroughly edited these diaries. his introduction, epilogue, and notes help to make the book a highly readable account of the California Trail and of the Gold Rush.”—Utah Historical Quarterly

“…a polished, readable account of the southern mines, a classic among gold rush narratives of this region, destined to take its place among the best in the field.”—Arizona and the West

“The volume is a significant addition to gold–rush bibliography as well as a valuable chronicle of mid–19th century America.”—Pacific Northwest Quarterly

H. Lee Scamehorn is a professor of history at the University of Colorado, Boulder campus.

Edwin P. Banks is the grandson and Jamie Lytle–Webb is the great–granddaughter of diarist John Banks.