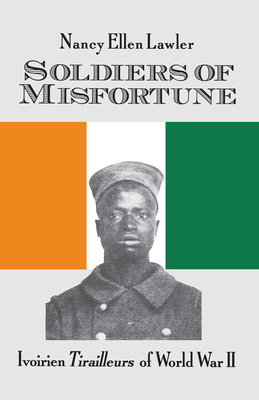 This is a study of the African veterans of a European war. It is a story of men from the Cote d‘Ivoire, many of whom had seldom traveled more than a few miles from their villages, who served France as tirailleurs (riflemen) during World War II.

Thousands of them took part in the doomed attempt to hold back the armies of the Third Relch in 1940; many were to spend the rest of the war as prisoners in Germany or Occupied France.

Others more fortunate came under the authority of Vichy France, and were deployed in the Defense of the “Motherland” and its overseas possessions against the threat posed by the Allies. By 1943, the tirailleur regiments had passed into the service of de Gaulle’s free French and under Allied command, played a significant role in the liberation of Europe.

In describing these complex events, Dr. Lawler draws upon archives in both France and the Cote d’Ivoire. She also carried out an extensive series of interviews with Ivoirien veterans principally, but not exclusively, from the Korhogo region. The vividness of their testimony gives this study a special character. They talk freely not only of their wartime exploits, but also of their experiences after repatriation.

Lawler allows them to speak for themselves. They express their hatred of forced labor and military conscription, which were features of the colonial system, yet at the same time reveal a pride in having come to the defense of France. They describe their role in the nationalist struggle, as foot soldiers of Felix Houphouet-Boigny, but also convey their sense of having become a lost generation. They recognize that their experiences as French soldiers had become sadly irrelevant in a new nation in quest of its history.

Nancy Ellen Lawler is Professor Emeritus of Economics and History at Oakton Community College. She is the author of Soldiers of Misfortune: Ivoirien Tirailleurs of World War II, and, with John Hunwick, co-editor of A Cloth of Many Colored Silks. Dr. Lawler currently lives in Wales and continues to work on West African history.