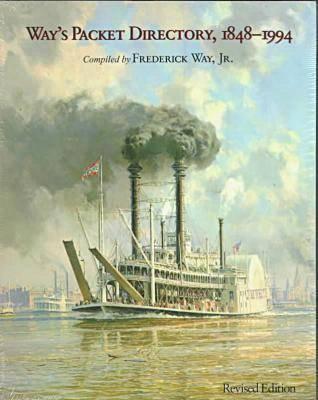 The first Mississippi steamboat was a packet, the New Orleans, a sidewheeler built at Pittsburgh in 1811, designed for the New Orleans-Natchez trade. Packets dominated during the first forty years of steam, providing the quickest passenger transportation throughout mid-continent America. The packets remained fairly numerous even into the first two decades of the twentieth century when old age or calamity overtook them. By the 1930s, the flock was severely depleted, and today the packet is extinct.

Containing almost 6,000 entries, Way’s Packet Directory includes a majority of combination passenger and freight steamers, but includes in a broader sense all types of passenger carriers propelled by steam that plied the waters of the Mississippi System. Each entry describes its steamboat by rig, class, engines, boilers, the shipyard where and when built, along with tidbits of historical interest on its use, demise, and/or conversion.

Praise For Way’s Packet Directory 1848–1994: Passenger Steamboats of the Mississippi River System since the Advent of Photography in Mid-Continent America…

“This is not a reading book, but rather a reference work. Even so, the marvelous introduction, the lengthy captions in the photo collection, and the various letters and special notes in the boat bios are captivating and enlightening.”

“The 620-page book attempts to list the history of every packet that traveled the Mississippi River system from 1848 to the present. … The book is a 69-year labor of love. … Fred Way is the world’s foremost authority on river life.”

“History scholars, steamboat researchers, genealogists and countless others will rejoice in the long-awaited … revision of Way’s Packet Directory. This is the most comprehensive treatment yet attempted of 19th- and 20th-century steamboats.”

Captain Frederick Way, Jr., was born in Sewickley, Pennsylvania, in 1902, and grew up in the adjacent village of Edgeworth near the Ohio River. Early on, he became fascinated with steamboats, and particularly with the freight-passenger packets still prominent on the river in the early 1900s.

While he was attending the University of Cincinnati, the “call of the river” caused Fred Way to leave after one year to take up the life of a riverman, and from 1925 until 1932 he operated the packet Betsy Ann between Pittsburgh and Cincinnati, becoming a licensed pilot and master. In the early months of the Great Depression, he lost his boat, and shortly after he began to write the story of the seven-year struggle to operate a packetboat in Log of the Betsy Ann, the first of his many publications.

Captain Way was also the originator and publisher for thirty-two years of the Inland River Record, an annual compilation of boats operating on inland waters. And in 1983 he compiled Way’s Packet Directory, 1848–1983: Passenger Steamboats of the Mississippi River System since the Advent of Photography in Mid-Continent America, one of the seven books he wrote on American rivers and the history of steamboats and their crews, and subsequently revised with a new foreword by Joseph W. Rutter.

From 1941 until his death, Captain Way was president of the Sons & Daughters of Pioneer Rivermen, an ongoing association dedicated to preserving the history of Western rivers. Captain Way died at his home in Marietta, Ohio, in October 1992.
Loading...
or
Not Currently Available for Direct Purchase