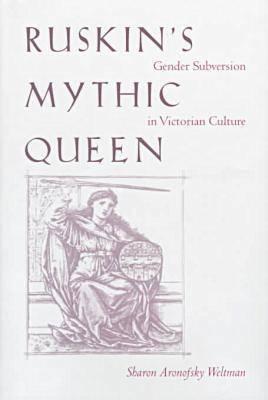 John Ruskin’s prominence as the author of “Of Queen’s Gardens,” his principal statement of Victorian gender opposition, makes him an ideal example for analyzing the power of mythic discourse to undermine gender division. Here, Ruskin creates a vision of feminine authority that draws simultaneously upon several sources (including the goddess Athena and Queen Victoria herself) to empower women in a worldwide arena redefined as a broader version of their domestic realm. In Ruskin’s effort to promote women’s expanded sphere of action, his mythmaking goes further than he anticipates: Ruskin feminizes both metaphor and language, and finally destabilizes the very notion of gender.

Ruskin’s Mythic Queen demonstrates that Victorian authors and artists used myth to challenge their culture’s rigid gender dichotomy. While Ruskin is usually seen as the most articulate advocate of nineteenth-century England’s sharply differentiated gender roles, Sharon Weltman shows that his mythopoetic prose yields many tools to break down fixed categories of gender.

This exciting revision of Ruskin situates him within a tradition of nineteenth- and twentieth-century myth, metaphor, and gender theorists, arguing for his significance as an example of how mythic discourse disrupts gender dichotomy even among those writers who seek to establish it.

Sharon Aronofsky Weltman is an Assistant Professor of English at Lousiana State University. She lives in Baton Rouge with her family.