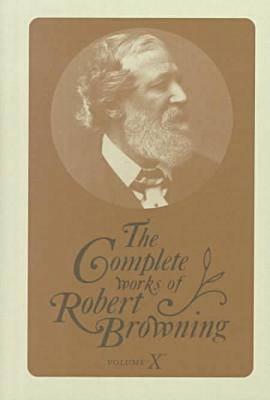 The Complete Works of Robert Browning, Volume X contains critical editions of Balaustion's Adventure: Including a Transcript from Euripides and Prince Hohenstiel-Schwangau, Saviour of Society. Both published in 1871, these two long poems take up a pair of subjects that held enduring fascination for Robert and Elizabeth Barrett Browning: classical Greek literature and the career of Napoleon III, Emperor of France. Balaustion's Adventure, which the poet characterized as merely a “May-month amusement,” was surprisingly successful with the reading public that paid more attention to Browning after the triumph of The Ring and the Book in 1868-69. His first poem since the publication of that masterpiece, Balaustion's Adventure creates a charming and brave narrator who recalls in vivid detail a performance of Euripides' play Alcestis.

Browning began a poem on Louis Napoleon in 1860, but not until after the fall of the Second Empire in 1870 did he attempt a full-scale portrait of the French emperor. As an exercise in self-justification, Prince Hohenstiel-Schwangau falls into a familiar sub-genre of Browning's dramatic monologues. The most intriguing aspect of the poem lies in its biographical importance: the character and career of Napoleon III was a topic of sustained, sharp disagreement between Robert and Elizabeth Browning.

As always in this acclaimed series, a complete record of textual variants is provided, as well as extensive explanatory notes.