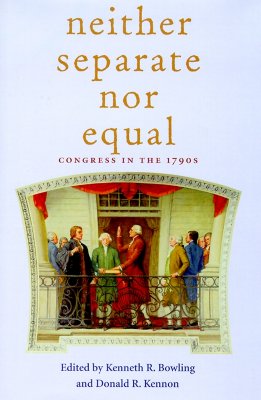 Neither Separate Nor Equal

Congress in the 1790s (Perspectives on the History of Congress)

Scholars today take for granted the existence of a wall of separation dividing the three branches of the federal government. "Neither Separate nor Equal: Congress in the 1790s" demonstrates that such lines of separation among the legislative, executive, and judicial branches, however, were neither so clearly delineated nor observed in the first decade of the federal government's history.
The first two essays describe the social and cultural milieu attending the movement of the republican court from New York to Philadelphia and the physical and social environment of Philadelphia in the 1790s. The following section examines the congressional career of New York's Egbert Benson, the senatorial career of Robert Morris as an expression of his economic interests, the vigorous opposition of Rep. William Branch Giles to the Federalist policies of the Washington administration, and finally the underappreciated role of congressional spouses.
The last five essays concentrate on areas of interbranch cooperation and conflict. In particular, they discuss the meaning of separation of powers in the 1790s, Washington as an active president with Congress, the contrast between Hamilton's and Jefferson's exercise of political influence with Congress, and John Adams's relationship with Congress during the Quasi-War crisis.
The essays in this collection, the second volume of the series Perspectives on the History of Congress, 1789-1801, originated in two conferences held in 1995 and 1996 by the United States Capitol Historical Society.

Kenneth R. Bowling is coeditor of "The Documentary History of the First Federal Congress, 1789 1791," and the author of "The Creation of Washington, D.C.: The Idea and Location of the American Capital."

Donald R. Kennon is chief historian of the United States Capitol Historical Society. He is coeditor of the Ohio University Press series Perspectives on the History of Congress, 1789 1801, and editor of the series Perspectives on the Art and Architectural History of the United States Capitol."
or
Not Currently Available for Direct Purchase