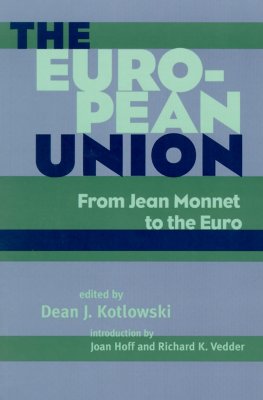 From Jean Monnet to the Euro

The transformation of Europe since the end of World War II has been astounding. In 1945, a battle–scarred continent lay in ruins. Today, it has achieved a level of integration, prosperity, and stability that few people could have anticipated. The life and career of the French statesman Jean Monnet and the recent adoption of the “euro” as Europe's common currency represent the bookends of this half–century–long metamorphosis.

This collection of essays, drawn from the lectures of the 1999 Baker Conference at Ohio University, explores Monnet's vision of an integrated Europe, its gradual implementation, and the social, economic, and international consequences. The scholarship focuses upon Monnet's life, personality, and legacy, the development of social policy within the European Union (EU), the economic and national security implications of the EU, and the continuation of an American presence in Europe through the North Atlantic Treaty Organization.

Praise For The European Union: From Jean Monnet to the Euro…

“Students and faculty in international economics and European studies will also find this book a useful source of background information about the development of the EU.”

“[The European Union] does an excellent job in its main area of focus. … Anyone seeking a brief overview of the road towards a common European currency since the 1950s or the Euro’s probably impact both in and outside of the EU would do well to start here.”

Dean Kotlowski is visiting assistant professor of history at Ohio University where he specializes in 20th-century American politics and public policy. His articles have appeared in The Historian, Journal of Policy History, and Business History Review.
Loading...
or
Not Currently Available for Direct Purchase