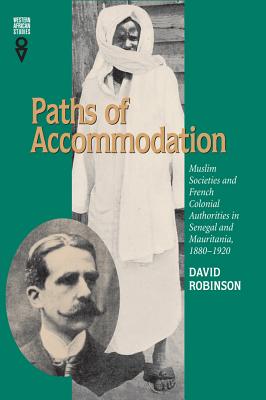 Between 1880 and 1920, Muslim Sufi orders became pillars of the colonial regimes and economies of Senegal and Mauritania. In Paths of Accommodation, David Robinson examines the ways in which the leaders of the orders negotiated relations with the Federation of French West Africa in order to preserve autonomy within the religious, social, and economic realms while abandoning the political sphere to their non-Muslim rulers.

This was a striking development because the local inhabitants had a strong sense of belonging to the Dar al-Islam, the “world of Islam” in which Muslims ruled themselves.

Drawing from a wide variety of archival, oral, and Arabic sources, Robinson describes the important roles played by Muslim merchants and the mulatto community of St. Louis, Senegal. He also examines the impact of the electoral institutions established by the Third Republic, and the French effort to develop a reputation as a “Muslim power”—a European imperial nation with a capacity for ruling over Islamic subjects.

By charting the similarities and differences of the trajectories followed by leading groups within the region as they responded to the colonial regimes, Robinson provides an understanding of the relationship between knowledge and power, the concepts of civil society and hegemony, and the transferability of symbolic, economic, and social capital.

David Robinson is a University Distinguished Professor of History and African Studies at Michigan State University. and the author of several studies in francophone and Islamic West Africa.