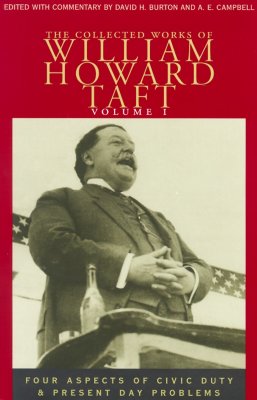 The Collected Works of William Howard Taft, Volume I

The inaugural volume of The Collected Works of William Howard Taft is composed of two of his earliest books, Four Aspects of Civic Duty and Present Day Problems. Based on a series of lectures delivered at Yale in 1906, Four Aspects of Civic Duty is an attempt by then Secretary of War Taft to bring to the attention of his audience the importance of civic duty from the perspective of the university graduate, the judge on the bench, the colonial administrator, and the national executive branch of government. His remarks were drawn from his own experience, while at the same time he laid down the principles of citizenship with which all people could identify. In Present Day Problems, William Howard Taft demonstrates the depth of his knowledge and the seriousness of his reflections on a wide range of topics including Sino-American relations and the ongoing contest between capital and labor in America’s increasingly industrial socioeconomy. The problems he takes up are met head-on and discussed in a fashion likely to persuade his audience that he is well prepared to tackle the burdens of the presidency.

The Collected Works of William Howard Taft, in eight volumes, will include Taft’s complete published works as well as his presidential and state addresses and selected court opinions from his days as chief justice of the Supreme Court.

“These speeches were given before Taft was elected President in 1908. A hundred years later, we can only envy a time when we could have a would-be president who could speak, knowingly, on, say, Roman (Civil) Law vs. Anglo-Saxon (Common) Law.”—RALPH

David H. Burton is the general editor of The Collected Works of William Howard Taft. An emeritus professor of history at St. Joseph’s University in Philadelphia, he is the author of several books on the presidency.

A. E. Campbell is professor emeritus, University of Birmingham and a leading British scholar of early twentieth-century American history.