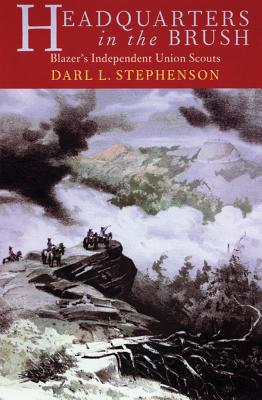 Headquarters in the Brush

Contrary to accepted myths, guerrilla tactics in the Civil War were not confined to the army of the Confederacy. In the fall of 1863, Union Colonel Carr B. White formed a group of scouts and sharpshooters, headed by Capt. Richard Blazer of the 91st Ohio Volunteer Infantry, to fight the bushwhackers in the mountains of West Virginia. The unit was so successful that Gen. George Crook mounted the group on horses in 1864 to combat rebel guerrillas, make deep raids, and act as the front and rear guard of the army, giving them the most dangerous of missions. In the Shenandoah Valley, General Philip Sheridan gave them the mandate to take on the renowned Confederate partisan John S. Mosby and his rangers. Equipped with advanced Spencer repeating rifles, they took the war to Mosby's Rangers as a regular cavalry could not do.
Up till now the conflicts between Blazer's Scouts and Mosby's Rangers have been told only from the Confederate perspective. Darl Stephenson provides a corrective to the exaggeration and distortion prevalent in the historical telling of these escapades. Heavily illustrated and using long-overlooked sources, "Headquarters in the Brush" presents a balanced and fascinating account of what may be the most extraordinary group of men in the American Civil War.

Darl L. Stephenson is a retired Middle East specialist for the Defense Intelligence Agency. He is also a retired USAFR Lieutenant Colonel.
Loading...
or
Not Currently Available for Direct Purchase