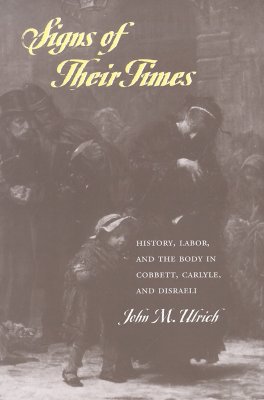 Signs of Their Times (Hardcover)

History, Labor, and the Body in Cobbett, Carlyle, and Disraeli

From the 1820s through the 1840s, debate raged over what Thomas Carlyle famously termed the Condition of England Question. While much of the debate focused on how to remedy the material sufferings of the rural and urban working classes, for three writers in particular--William Cobbett, Thomas Carlyle, and Benjamin Disraeli--the times were marked by an even more pervasive crisis that threatened not only the material lives of workers, but also the very stability of meaning itself. At the root of this crisis lay industrial capitalism, and its impact was not only economic, but also cultural, bringing the nation to the very brink of a precipice.
In his provocative new study of these three fascinating but often misunderstood writers, John M. Ulrich challenges the commonly held notion that Cobbett, Carlyle, and Disraeli reacted to the crisis of their times out of a facile nostalgia for an idealized past; instead, Ulrich argues that each writer's response was remarkably sophisticated and highly self-conscious in its attention to the complex interrelation between textual signs and material conditions.
"Signs of Their Times" reveals how these three very different writers shared a common conviction that their labor was not merely a resistance to change, but an active force for change, as each sought to refashion the currently unstable signs of the times history, labor, and the body into mutually dependent guarantors of social stability and meaning.