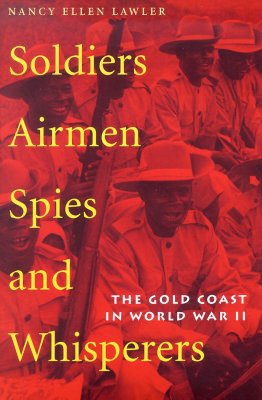 The fall of France in June 1940 left the Gold Coast surrounded by potentially hostile French colonies that had rejected de Gaulle's call to continue the fight, signaling instead their support for Marshall P tain's pro-German Vichy regime.

In Soldiers, Airmen, Spies, and Whisperers, Nancy Lawler describes how the Gold Coast Regiment, denuded of battalions fighting in East Africa, was rapidly expanded at home to meet the threat of invasion. Professor Lawler also shows how the small airport at Takoradi was converted into a major Royal Air Force base and came to play a vital role in the supply of aircraft to the British Eighth Army in North Africa. The importance of the Gold Coast to the Allied war effort necessitated the creation of elaborate propaganda and espionage networks, the activities of which ranged from rumor-mongering to smuggling and sabotage. The London-based Special Operations Executive moved into West Africa, where it worked closely with de Gaulle's Free French Intelligence. Lawler presents a vivid account of SOE's major triumph-masterminding the migration of a substantial part of the Gyaman people from Vichy C te d'Ivoire to the Gold Coast. As she looks at the plethora of military and civil organizations involved in the war, Lawler throws light on decision making in Brazzaville, London, and Washington. This is an account of World War II in one colony, but the story is firmly set within the wider context of a world at war.

Nancy Ellen Lawler is Professor Emeritus of Economics and History at Oakton Community College. She is the author of Soldiers of Misfortune: Ivoirien Tirailleurs of World War II, and, with John Hunwick, co-editor of A Cloth of Many Colored Silks. Dr. Lawler currently lives in Wales and continues to work on West African history.
Loading...
or support indie stores by buying on