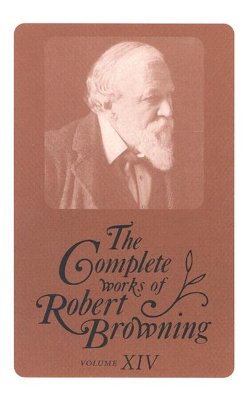 The Complete Works of Robert Browning

In seventeen volumes, copublished with Baylor University, this acclaimed series features annotated texts of all of Robert Browning's known writing. The series encompasses autobiography as well as influences bearing on Browning's life and career and aspects of Victorian thought and culture.?
Volume XIV of "The Complete Works of Robert Browning" records a transition in the poet's career. With "The Agamemnon of Aeschylus "(1877), Browning ended his experiments with classical sources, creating his "transcript" not quite a translation of the Greek original and providing an intriguing explanation for his approach. "La Saisiaz," the deeply personal expression of Browning's shock at the sudden death of a dear friend, was published in 1878 with "The Two Poets of Croisic," an extended ironic meditation on literary fame. Browning's collection of six poems under the title "Dramatic Idyls" (1879) marks the poet's return to the dramatic forms he perfected in "Men and Women" and "Dramatis Personae," and a revival of his interest in the psychology of motives.
As always in this acclaimed series, a complete record of textual variants is provided, as well as extensive explanatory notes.

Paul Turner, Fellow Emeritus of Linacre College, Oxford, edited" Browning's Men and Women" in 1972 and is the author of "The Life of Thomas Hardy" (1998).

Michael Bright is a professor emeritus at Eastern Kentucky University. He has written books and articles on nineteenth-century literature and Gothic Revival architecture.