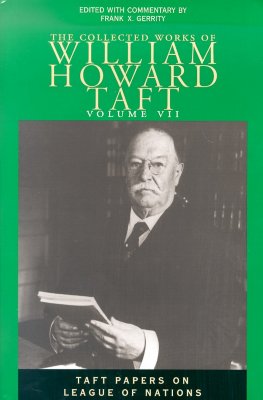 Eager to turn the congressional election of 1918 into a confirmation of his foreign policy, President Woodrow Wilson was criticized for abandoning the spirit of the popular slogan “Politics adjourned!”

His predecessor, William Howard Taft, found Wilson difficult to deal with and took issue with his version of the League of Nations, which Taft felt was inferior to the model proposed by the League to Enforce Peace. Rather than join the massive Republican opposition to the Treaty of Versailles, however, Taft instead supported Wilson’s controversial decision to travel to Paris as the head of the American peace delegation, and he defended the critical tenth article in the covenant, which detractors saw as a surrender of American sovereignty. He also counseled Wilson to insert a clause concerning the Monroe Doctrine that would pacify the Senate’s group of “reservationists,” whose votes were essential to approval of the treaty.

Volume VII in The Collected Works of William Howard Taft consists of the Taft Papers on League of Nations originally published in 1920. This is a collection ofTaft’s speeches, newspaper articles, and complementary documents that reflect his consistent support for a league of nations and, eventually, for the Covenant of the League of Nations emanating from the Paris Peace Conference.

Although the failure of the treaty and its League of Nations can probably be laid at the feet of an obstinate Wilson and a wily Henry Cabot Lodge, William Howard Taft can be credited with rising above partisanship to emerge as the League’s most consistent supporter.

As in the rest of the Collected Works, Taft Papers on League of Nations provides a window on the machinations surrounding some of the most significant decisions of the era.

The late Frank X. Gerrity was a professor of American history at St. Joseph's University, Philadelphia, specializing in the diplomatic history of the United States.