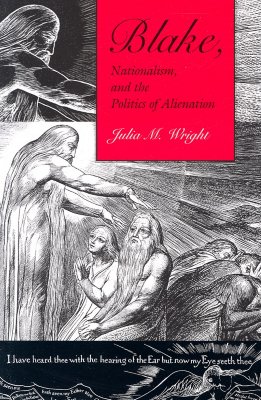 Blake, Nationalism, and the Politics of Alienation (Hardcover)

William Blake's reputation as a staunch individualist is based in large measure on his repeated attacks on institutions and belief systems that constrain the individual's imagination. Blake, however, rarely represents isolation positively, suggesting that the individual's absolute freedom from communal pressures is not the ideal. Instead, as Julia Wright argues in her award-winning study "Blake, Nationalism, and the Politics of Alienation," Blake's concern lies with the kind of community that is being established. Moreover, writing at the moment of the emergence of modern nationalism, Blake reveals a concern with the national community in particular.
Beginning with a discussion of the priority of national narrative in late-eighteenth-century art theory and antiquarianism, "Blake, Nationalism, and the Politics of Alienation" traces its relevance in Blake's printed works, from The Poetical Sketches and the Lambeth Prophecies to The Laocoon. Professor Wright then turns to Europe, America, and Visions of the Daughters of Albion, focusing on Blake's portrayals of particular characters alienation from the groups and ideologies represented in the texts. The book closes by arguing that Blake's major printed works, Milton and Jerusalem, are explicit and extensive engagements with the question of nation and empire.
Although nationalism existed in various forms during the Romantic period, Blake's contemporaries generally assumed that nations should progress continuously, producing a clear narrative line from an auspicious origin to the perfect fulfillment of that promise. Wright argues that these mutually determining constructs of national character and national narrative inform Blake's handling of the problem of the individual-within-a-community.

An associate professor of English and Film studies and Canada Research Chair in English at Wilfrid Laurier University, Waterloo, Ontario, Julia M. Wright is the editor of "The Missionary: An Indian Tale" and the co-editor of "Romanticism, History, and the Possibilities of Genre: Re-forming Literature, 1789-1837"; "Nervous Reactions: Victorian Recollections of Romanticism"; and "Captivating Subjects: Writing Confinement, Citizenship, and Nationhood in the Nineteenth Century."
or
Not Currently Available for Direct Purchase
Copyright © 2020 American Booksellers Association